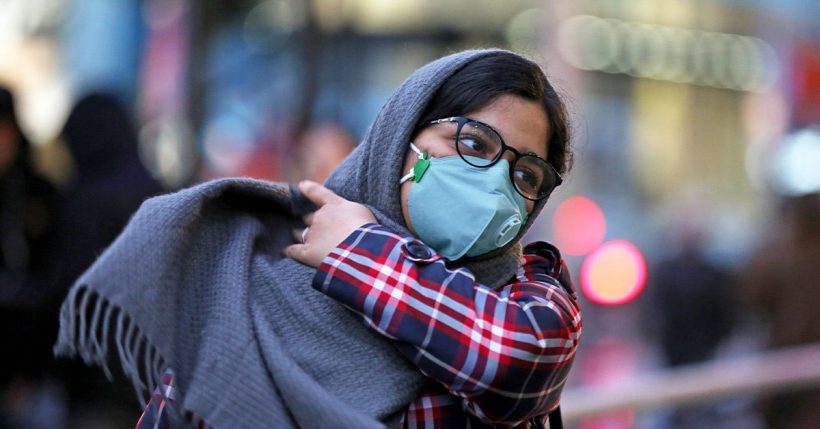 There’s still a lot we don’t know about the novel coronavirus that’s already sickened more than , with more than 2,000 deaths reported.

But one thing that’s clear is that in serious cases, the virus can have a devastating effect on the body — and not just on the lungs.

Here’s what we know so far about how the new coronavirus — now dubbed COVID-19 — affects the different systems in the body.

As with other illnesses — including SARS, MERS, and the common cold — COVID-19 is a respiratory disease, so the lungs are usually affected first.

Early include fever, cough, and shortness of breath. These appear as soon as 2 days, or as long as 14 days, after exposure to the virus.

The severity of COVID-19 varies from mild or no symptoms to severe or sometimes fatal illness. Data on more than 17,000 reported cases in China found that almost 81 percent of cases were mild. The rest were severe or critical.

Older people and those with chronic medical conditions appear to have a for developing severe illness.

This variability also shows up in how COVID-19 affects the lungs.

Some people may only have , while others develop non-life-threatening pneumonia. But there’s a subset of people who develop severe lung damage.

“What we’re frequently seeing in patients who are severely ill with [COVID-19] is a condition that we call acute respiratory distress syndrome, or ARDS,” said Dr. Laura E. Evans, a member of the Society of Critical Care Medicine Leadership Council and an associate professor of pulmonary, critical care, and sleep medicine at the University of Washington Medical Center in Seattle.

ARDS doesn’t happen just with COVID-19. A number of events can trigger it, including infection, trauma, and sepsis.

These cause damage to the lungs, which leads to fluid leaking from small blood vessels in the lungs. The fluid collects in the lungs’ air sacs, or alveoli. This makes it difficult for the lungs to transfer oxygen from the air to the blood.

While there’s a shortage of information on the type of damage that occurs in the lungs during COVID-19, a recent report suggests it’s to the damage caused by SARS and MERS.

One recent of 138 people hospitalized for COVID-19 found that on average, people started having difficulty breathing 5 days after showing symptoms. ARDS developed on average 8 days after symptoms.

Treatment for ARDS involves supplemental oxygen and mechanical ventilation, with the goal of getting more oxygen into the blood.

“There isn’t a specific treatment for ARDS,” Evans said. “We just support the person through this process as best we can, allowing their bodies to heal and their immune system to address the underlying events.”

Other organs affected by COVID-19

The lungs are the main organs affected by COVID-19. But in serious cases, the rest of the body can also be affected.

“In patients who become severely ill, a good proportion of those patients also develop dysfunction in other organ systems,” Evans said.

However, she says this can happen with any severe infection.

This damage to the organs isn’t always directly caused by the infection, but can result from the body’s response to infection.

Some people with COVID-19 have reported , such as nausea or diarrhea, although these symptoms are much less common than problems with the lungs.

While coronaviruses seem to have an easier time entering the body through the lungs, the intestines aren’t out of reach for these viruses.

Earlier reports identified the viruses that cause SARS and MERS in intestinal tissue biopsies and stool samples.

Two recent studies — one in the New England Journal of Medicine and a preprint on medRxiv — report that stool samples of some people with COVID-19 tested positive for the virus.

However, researchers don’t know yet whether fecal transmission of this virus can occur.

Evans says COVID-19 can also affect the heart and blood vessels. This may show up as irregular heart rhythms, not enough blood getting to the tissues, or blood pressure low enough that it requires medications.

So far, though, there’s that the virus directly damages the heart.

When liver cells are inflamed or damaged, they can leak higher than normal amounts of enzymes into the bloodstream.

Elevated liver enzymes aren’t always a sign of a serious problem, but this laboratory finding was seen in people with SARS or .

One recent found signs of liver damage in a person with COVID-19. Doctors says it’s not clear, though, if the virus or the drugs being used to treat the person caused the damage.

Some people hospitalized with COVID-19 have also had , sometimes requiring a kidney transplant. This also occurred with SARS and .

During the SARS outbreak, scientists even found the virus that causes this illness in the tubules of the kidneys.

There’s “little evidence,” though, to show that the virus directly caused the kidney injury, according to a World Health Organization report.

Dr. James Cherry, a research professor of pediatrics in the David Geffen School of Medicine at UCLA, says the kidney damage may be due to other changes that happen during coronavirus infection.

“When you have pneumonia, you have less oxygen circulating,” he said, “and that can damage the kidneys.”

With any infection, the body’s immune system responds by attacking the foreign virus or bacteria. While this immune response can rid the body of the infection, it can also sometimes cause collateral damage in the body.

This can come in the form of an intense inflammatory response, sometimes called a “cytokine storm.” The immune cells produce cytokines to fight infection, but if too many are released, it can cause problems in the body.

“A lot of [the damage in the body during COVID-19] is due to what we would call a sepsis syndrome, which is due to complex immune reactions,” Evans said. “The infection itself can generate an intense inflammatory response in the body that can affect the function of multiple organ systems.”

Another thing about the immune system is that, so far, there are almost no cases of COVID-19 in children under 9 years old. Scientists aren’t sure whether young children aren’t getting infected or their symptoms are so mild that no one notices it.

Cherry says children also have a less severe illness than adults during other kinds of infections, including measles and pneumococcal infections.

He says this may be because children have a “straightforward immune response,” whereas older people can sometimes have an “over-response.” It’s this excess immune response that causes some of the damage during infections.

“There was evidence of this happening during SARS,” Cherry said, “and I suspect it could also be playing out here [with COVID-19].”