The newspaper hit the front porches of the wind-scarred prairie town on a Thursday afternoon: Coronavirus numbers were spiking in western Minnesota.

But ask around Benson, stroll its three-block business district, and some would tell a different story: The Swift County Monitor-News, the tiny newspaper that’s reported the news here since 1886, is not telling the truth. The vaccine is untested, they say, dangerous. And some will go further: People, they’ll tell you, are being killed by COVID-19 vaccinations.

It’s another measure of how America’s divisions don’t just play out on cable television.

It has seeped into the American fabric, all the way to Benson’s 12th Street, where two neighbors — each in his own well-kept, century-old home — can live in different worlds. 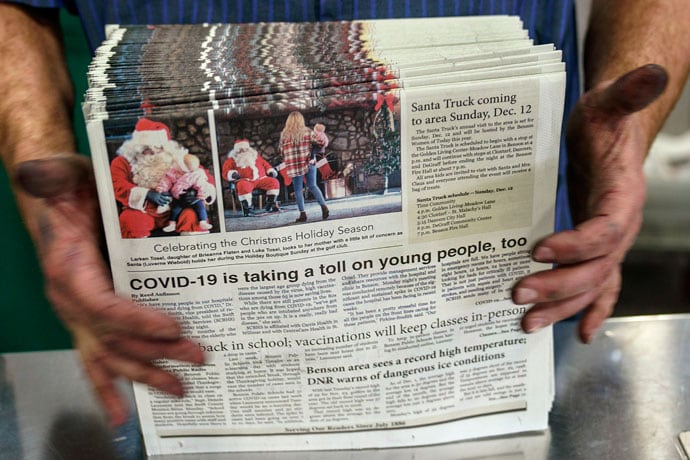 In one house is Reed Anfinson, publisher, editor, photographer and reporter for the Monitor-News. Most weeks, he writes every story on the paper’s front page.

While his editorials lean left, he works hard to report the news straight. But in an America of competing visions, some here say he has taken sides.

Nowhere in the Monitor-News, for example, will you find reports that local people are dying because they’ve been inoculated.

“There are no alternative facts,” Anfinson says. “There is just the truth.”

His neighbor, Jason Wolter, is a thoughtful, broad-shouldered Lutheran pastor who reads widely and measures his words carefully. He also suspects Democrats are using the coronavirus pandemic as a political tool, doubts President Joe Biden was legitimately elected and is certain that COVID-19 vaccines kill people.

He hasn’t seen the death certificates and hasn’t contacted health authorities, but he’s sure the vaccine deaths occurred: “I just know that I’m doing their funerals.”

He’s also certain that information “will never make it into the newspaper.”

Wolter’s frustration boils over during a late breakfast in a town cafe. Seated with a reporter, he starts talking as if Anfinson is there.

“You’re lying to people,” he says. “You flat-out lie about things.”

Anfinson is everywhere in Swift County: the city council, the county commissioners, the school board and nearly every other gathering of consequence. He’s there for school concerts, community fund-raisers, the county fair. His white Jeep is often spattered with mud from the county’s dirt roads.

He is 67 but looks at least a decade younger. A contemplative man who casually quotes Voltaire, he loves newspapers deeply, and mourns the hundreds of small-town papers that have gone under.

He’s proud that his reporting means something here, whether it’s a high-school award or an expensive building project the community rejected after he wrote about it.

Still, there are times it’s exhausting. And expensive. With declining circulation and ads, he estimates his three little local newspapers are worth at least $1 million less than a decade ago.

It can be easy, looking around Benson, to think it is a land that time forgot.

Bartenders often greet customers by name. The town’s cafes feel like high school lunchrooms, with people wandering between tables to say hello. Many farms and businesses have been owned by the same families for decades. Anfinson’s family has been here for generations.

But plenty has changed.

Stores closed. Little farms were bought up by more successful farmers. Swift County’s population has dropped about 30 percent since 1960, and now has about 10,000 residents. Meanwhile, a county that was 98% white in 1990 has seen a stream of new minority residents, particularly Latinos. The county is now 87% white — far whiter than much of America, but far more diverse than a generation ago.

“There are a lot of people coming through that I don’t recognize,” said Terri Collins, Benson’s cheerful mayor, whose family has been in Benson for five generations. “I used to know all of my neighbors and now that’s different. And I don’t know what to blame for that.”

Once, neighborliness and good manners were near-commandments here. Now anger is on the rise.

Neighborhood shouting matches are more common, a local official’s car was vandalized, and a “F— Biden” flag now flies along a school bus route. Collins and the town police chief both say they sometimes worry about Anfinson’s safety.

“Ten years ago I don’t think anything like this would happen,” she said.

But on 12th street, things are civil.

The Anfinson and Wolter families get along, at least outwardly. They wave when they see each other. When one family is out of town, the other will sometimes watch their home.

Wolter also knows that plenty of people write him off as a conspiracy monger. But he’s far more complicated.

He criticizes conservative politicians for trying to make it illegal to burn the American flag, for example, and worries that his conservative opinions could sway what he sees as the truth.

He’s a careful reader, in his own way, whose home library includes everything from Sophocles to “The Grapes of Wrath.”

“For better or for worse I don’t really trust anything I read,” he says. The answer, he said, is research, probing the farthest corners of the internet.

The answers are not to be found, he insists, in the Swift Country Monitor-News.

Anfinson, for his part, doesn’t want to talk about Wolter, at least not directly. He’s watched Benson’s fragile web of community fray too much.

Instead, he talks proudly about the Monitor-News: how it prints letters to the editor that are harshly critical of it; how he reports the truth even if it costs him.

His newspaper should bind people together, he says.

Instead, he says, America and Benson are growing angrier.