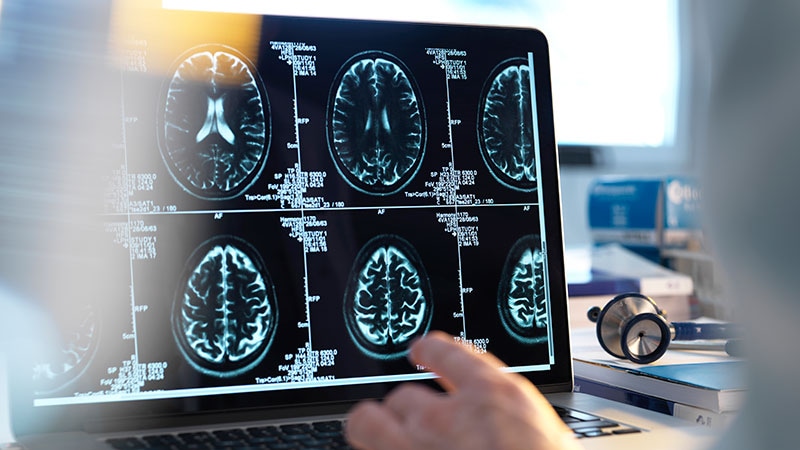 A new report details the case of a patient on the new experimental Alzheimer’s drug, lecanemab, who died after experiencing numerous acute intracerebral hemorrhages during treatment with tissue plasminogen activator (tPA) for acute ischemic stroke.

“The extensive number and variation in sizes of the cerebral hemorrhages in this patient would be unusual as a complication of tPA solely related to cerebrovascular amyloid,” the authors write. “The findings raise the possibility of cerebral hemorrhages and necrotizing vasculopathy associated with tPA infusion in a patient with cerebrovascular amyloid who had received lecanemab.”

The case report appears as a letter to the New England Journal of Medicine published online on January 4.

It has previously been reported that two hemorrhage-related deaths occurred in an open-label extension of the CLARITY AD lecanemab phase 3 clinical trial. The current case report appears to relate to one of these deaths.

The US Food and Drug Administration (FDA) has granted priority review to lecanemab, with a Prescription Drug User Fee Act action date of January 6, 2023.

The authors of the current case report, from Northwestern University Feinberg School of Medicine, Chicago, with corresponding author Sherry Hsiang-Yi Chou, MD, note that the 65-year-old patient presented to the emergency department 30 minutes after acute onset of an ischemic stroke.

She had participated in the randomized phase 3 of the trial of lecanemab, during which the treatment assignment is not known, followed by participation in the open-label phase, in which three intravenous lecanemab infusions were received (one infusion every 2 weeks), with the latest infusion administered 4 days before the stroke.

Magnetic resonance imaging (MRI) of the head that had been performed 81 days before the stroke showed mild small-vessel disease, with no microhemorrhages, edema, or amyloid-related imaging abnormalities, and computed tomography (CT) performed just before tPA administration showed hypodensities in the left temporal-parietal regions and a distal left middle cerebral artery branch occlusion, but no hemorrhage.

The patient had no contraindications to thrombolysis and was within the conventional time window for treatment.

After intravenous administration of an 8-mg tPA bolus and 50 minutes into the tPA infusion (when 65.7 mg of the total dose of 76 mg had been administered), hypertension suddenly developed and the tPA infusion was stopped.

A CT scan showed extensive, multifocal intraparenchymal hemorrhages. There was no systemic bleeding. Cryoprecipitate and tranexamic acid were administered. The patient had global aphasia and severe agitation; frequent, nonconvulsive seizures seen on electroencephalography were treated successfully with multiple antiseizure medications.

The patient was treated with comfort measures at the request of the family and subsequently died. The autopsy showed extensive multifocal intraparenchymal hemorrhages, cerebral amyloid angiopathy, “high” Alzheimer’s disease neuropathologic changes, and diffuse histiocytic vasculitis with necrotizing vasculopathy involving amyloid deposition within (but not outside) the blood-vessel walls.

The authors of the case report have chosen not to comment further on the case.

The hospital issued a statement saying: “Northwestern Medicine physicians reported this case to the New England Journal of Medicine in an effort to provide relevant data to the medical and scientific community regarding the study: Lecanemab in Early Alzheimer’s Disease. We are declining to comment beyond the Letter to the Editor and recommend contacting the sponsor with any questions about this drug.”

Two of the CLARITY AD investigators have responded to the case report in a separate letter to the New England Journal of Medicine, also published online on January 4.

They report that there has been another case of cerebral hemorrhage in a patient who had received lecanemab in the extension phase and had been taking apixaban for atrial fibrillation.

They say that in the current case report, “although tPA appears to be the proximate cause of death, this was an unusual case, and we understand why the authors want to highlight a potential concern.”

Noting that this is the first fatal hemorrhagic event occurring after tPA treatment that has been reported from the CLARITY AD trial, they point out that there have been earlier reports of fatal large catastrophic intracerebral hemorrhages after tPA treatment in persons with cerebral amyloid angiopathy (CAA) in the absence of any antiamyloid medications.

They say these reports are consistent with the known increased risk for intracerebral hemorrhage in persons with CAA.

They also note that vasculitis, which was also mentioned in the case report, has not previously been reported in association with lecanemab, but there have been more than 95 previous reports in the literature describing uncommon cases of vasculitis associated with CAA that were not associated with antiamyloid therapy.

Asked for a comment, the manufacturer of lecanemab, Eisai, said that the response letter from the CLARITY AD investigators “serves as the comments we would like to make.”

“However, the number and extent of bleeds in this patient was quite severe, raising concerns that lecanemab treatment may have exacerbated the severity of bleeding. Therefore, this case does raise concerns and we should be very vigilant, gathering data, and being very careful when providing such treatments to patients with risk factors such as APOE4 homozygosity, amyloid angiopathy and anticoagulants,” he said.

Weiner explained that all the monoclonal antibodies that remove amyloid plaques are associated with amyloid-related imaging abnormalities (ARIA), which includes bleeding in the brain.

“This is an adverse event which occurs from this type of therapy. It has been proposed that when amyloid is removed from blood vessels, the vessels are more likely to bleed,” he noted.

“Patients who are treated with anticoagulants are more susceptible to bleeding and the risk/benefit ratio for lecanemab and similar antibody treatments may be increased in these individuals,” he added.

He also pointed out that the lecanemab trial suggested that APOE4 homozygotes may not benefit as much from treatment as the other patients. “Therefore, in this group the risk/benefit ratio is increased.”

“We are just at the beginning of the very exciting era of treatment of Alzheimer’s disease to slow progression. We must gather all the data we can and proceed cautiously with thorough patient monitoring,” Weiner concluded.

In the CLARITY AD trial, ARIA-H (combined cerebral microhemorrhages, cerebral macrohemorrhages, and superficial siderosis) was reported as one of the more common adverse events associated with lecanemab, occurring in 17.3% of lecanemab patients versus 9% of placebo patients.

CLARITY AD was supported by Eisai (regulatory sponsor) with partial funding from Biogen. Chou reports being a consultant for CSL Behring. Disclosures for coauthors are available at the NEJM site.