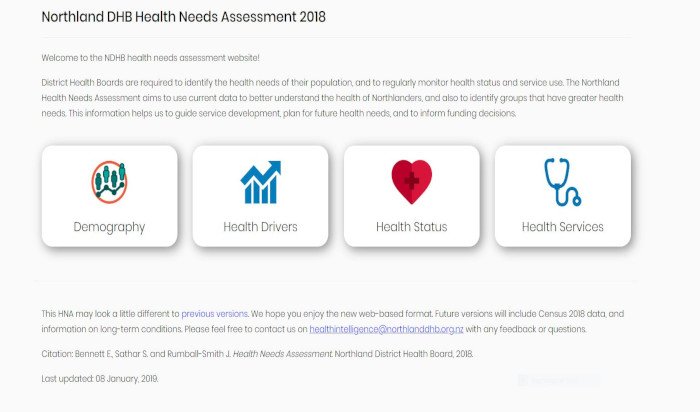 Northland District Health Board (DHB), which is based in Whangarei and covering the northernmost part of the North Island in New Zealand, has launched a web-based interactive version of the Health Needs Assessment (HNA).

DHBs must produce an HNA report every 5–7 years as a way of monitoring the health and wellbeing of the population, as well as their need for health services. The reports are typically published as lengthy paper-based or PDF documents.

Former Northland DHB clinician Juliet Rumball-Smith was instrumental in driving the development of an online HNA, which is intended to make the data easier to access and understand by anyone.

“There’s a lot of data already published, but it’s quite hard to access or understand, so we thought why not create an application where people can access information themselves and with interpretation already there,” Bennett says.

“We can also update it as data becomes available, such as the Census 2018 data which will be published soon.”

A survey completed with stakeholders before the new tool was published found that 86 per cent of respondents said the web-based format improved their ability to access the data.

“We’re also hoping to use it beyond the HNA by having forecasting and projections data available,” says Bennett.

“Our real aim is to get a one-stop-shop for people to go to look for population health data specific to Northland.”

A version of this article first appeared on eHealthnews.nz.