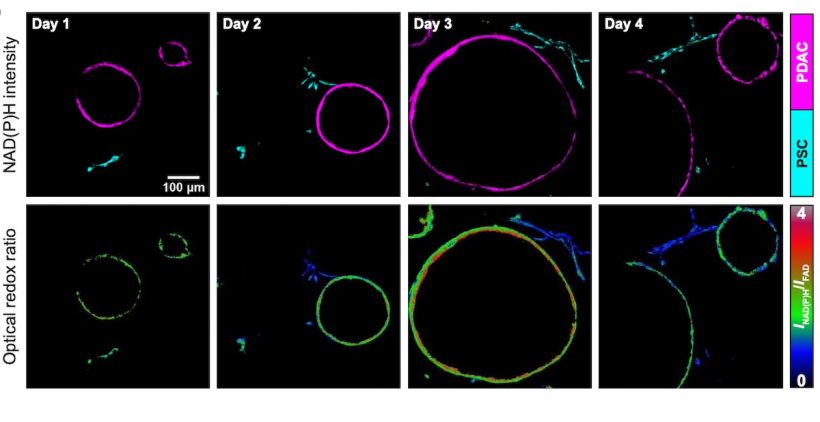 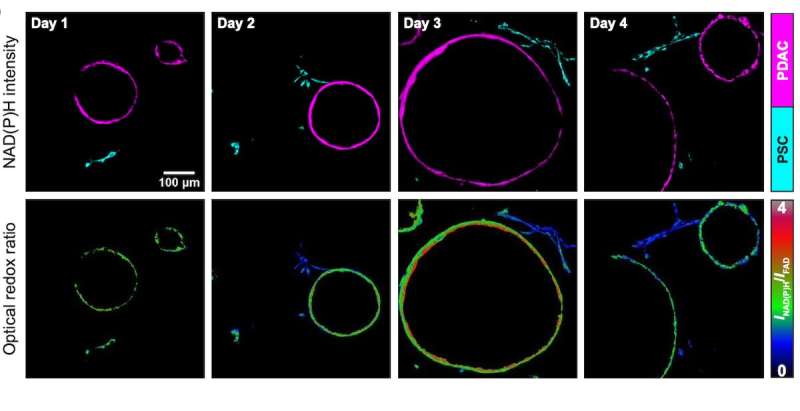 Pancreatic cancer is a rare, yet elusive and deadly cancer, with a five-year survival rate of about 10%. If the cancer has metastasized, that rate lowers to 3%. And treatment options are extremely limited.

“It’s one of the scarier cancers because once you discover that a person has pancreatic cancer, it’s often too late because there are no symptoms,” says Rupsa Datta, an assistant scientist in the Skala Lab. “The survival rate is so low because at that point, you can’t really do anything.”

The Skala lab uses advanced optical imaging to study the metabolic activity that leads to tumor growth, in hopes that better understanding of the tumor microenvironment can lead to new therapies and treatments.

In research published today in the journal Science Advances, Datta and colleagues describe how cancer cells can hijack the metabolic activity of certain non-cancer cells in the pancreas to fuel tumor growth.

When cancer cells begin to proliferate, an integral part of the tumor microenvironment is the extracellular matrix (ECM)—a network of molecules that help provide structure for the cells that make up an organ like the pancreas.

It is the interactions between cancer cells and these PSCs that are key to the proliferation and survival of the cancer, says Datta.

The researchers combined pancreatic cancer cells and PSCs into an organoid model, a 3D cell culture environment within a gel-like matrix structure that more closely mimics the biology of a live organ or tumor.

Optical metabolic imaging allows researchers to visualize and measure the metabolic interactions between cells in real-time. The technique is non-invasive and label-free, meaning it uses the innate autofluorescence of cells as a read out instead of adding other reagents that would damage the cells.

Changes in metabolism are measured by the reduction-oxidation state of the cells, or redox state, which fluctuates as electrons are transferred between molecules within a cell to help them grow and divide.

“We found that when these non-cancer cells are present, the cancer cell redox state becomes more oxidized and moves toward proliferation,” says Datta. “When the PSCs were touching the cancer cells, they were becoming more reduced.”

This transfer between cells suggests that cancer cells may be overcoming their redox limitation of cell proliferation by directly interacting with PSCs and exploiting the metabolic process to support cancer growth.

Exactly how the physical interaction between these cells leads to redox state changes is still unknown. But Datta hopes that further understanding of these interactions will ultimately lead to targeted therapies that would prevent cancer cell proliferation and tumor development.

For this study, the Skala Lab closely collaborated with cancer biologist Matt Vander Heiden and his lab at the Koch Institute for Integrative Cancer Research at the Massachusetts Institute of Technology (MIT), with funding from the nonprofit organization Stand Up to Cancer (SU2C).

“Most of our collaborators are in Wisconsin, but this was a long-distance collaboration, so because of the grant, I could travel to their lab and they could come here, too,” says Datta. “It was a very interesting project because we have expertise in different fields. And we both need to answer these questions.”

Datta says that while the Skala Lab developed the advanced imaging techniques to get these metabolic measurements, the Vander Heiden Lab was integral to setting up the organoid model and putting the data into biological perspective and relevance in the cancer field.