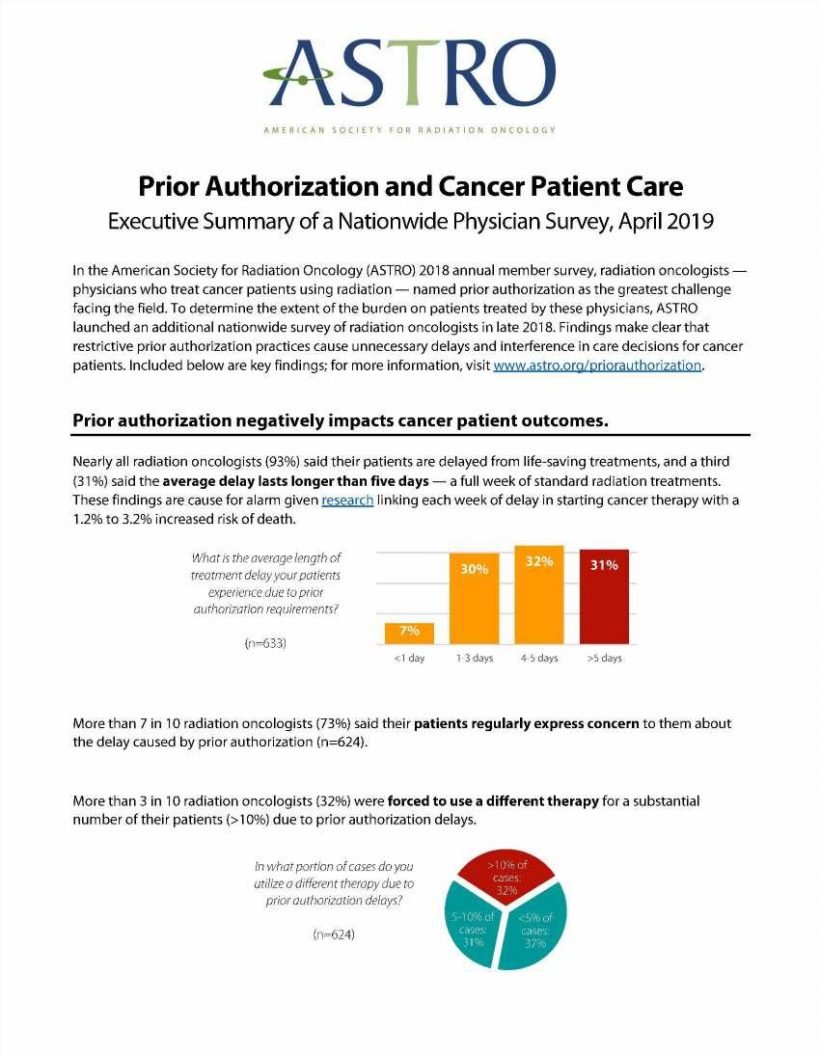 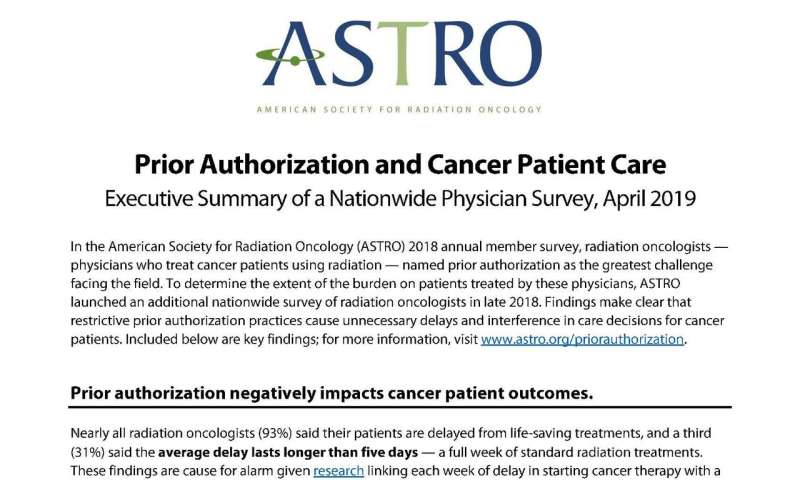 Restrictive prior authorization practices cause unnecessary delays and interference in care decisions for cancer patients, according to a new survey of nearly 700 radiation oncologists—physicians who treat cancer patients using radiation— released today by the American Society for Radiation Oncology (ASTRO).

Nearly all radiation oncologists (93%) said that their patients are delayed from life-saving treatments, and a third (31%) said the average delay lasts longer than five days—a full week of standard radiation treatments. These delays cause added stress and anxiety to patients already concerned about their health, and they are cause for alarm given research linking each week of delay in starting cancer therapy with a 1.2% to 3.2% increased risk of death.

In addition to prevalent treatment delays, the ASTRO physician survey illuminates other ways prior authorization negatively impacts patient outcomes and takes physicians away from caring for their patients:

“This survey makes clear that restrictive prior authorization practices can cause unnecessary, stressful and potentially life-threatening delays for cancer patients,” said Paul Harari, MD, FASTRO, Chair of the ASTRO Board of Directors and professor and Chairman of human oncology at the University of Wisconsin-Madison. “While the system may have been designed as a path to streamline and strengthen health care, it is in fact frequently harmful to patients receiving radiation therapy. In its current form, prior authorization causes immense anxiety and wastes precious time for cancer patients.”

“Radiation oncology and cancer patients have been particularly hard hit by prior authorization’s unnecessary burden and interference in care decisions,” said Vivek Kavadi, MD, Vice Chair of ASTRO’s Payer Relations Subcommittee and a radiation oncologist at Texas Oncology. “Radiation oncologists increasingly are restricted from exercising our clinical judgment in what is in the best interest of the patient, yet we are held accountable for the outcomes of treatments where decisions have been taken out of our hands.”

In the 2018 annual ASTRO member survey, radiation oncologists named prior authorization as the greatest challenge facing the field. The burden was especially prominent among private practitioners in community-based settings, where the majority of cancer patients receive care.

The findings from ASTRO’s new physician survey align with recent reports from the American Medical Association (AMA), American Cancer Society Cancer Action Network (ACS CAN) and others, demonstrating the pervasiveness of prior authorization obstacles throughout the American health care system.

ASTRO recently signed onto a letter with the AMA and other medical societies calling for CMS to require Medicare Advantage plans to align their prior authorization requirements with a Consensus Statement on Improving the Prior Authorization Process authored jointly by leading provider and payer organizations.