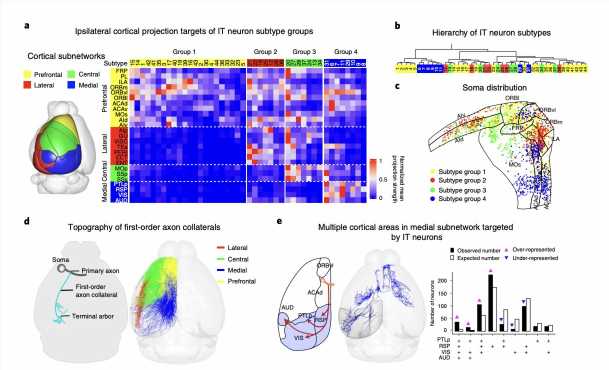 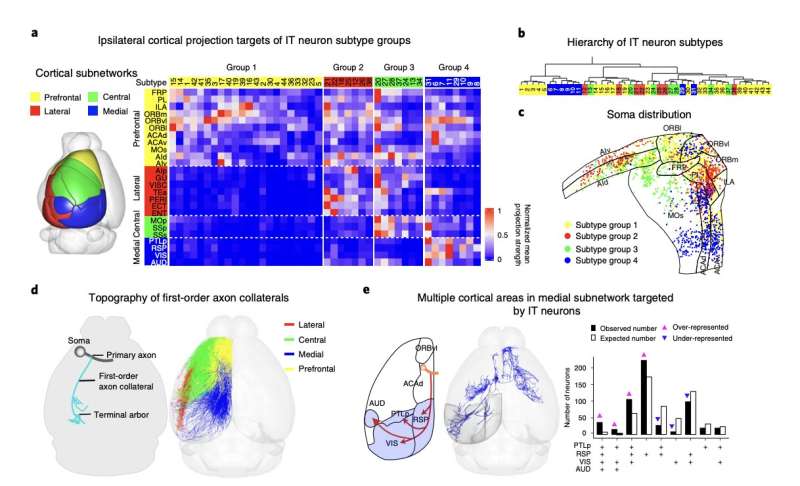 The prefrontal cortex (PFC), the part of the cerebral cortex that covers the mammalian brain’s frontal lobe, is implicated in the mental planning of complex behavior, decision-making and the moderation of social behavior. Studies suggest that the PFC is also the “center” that integrates and regulates the activity of different parts of the brain.

While many neuroscientists worldwide have investigated this region of the brain and its functions, the organization of axon projections of PFC neurons is still poorly understood. The organization of these projections are believed to be closely associated with the PFC’s ability to control and regulate a variety of brain regions.

Researchers at the Chinese Academy of Sciences and other institutes in China have recently used a tracing technique they created to reconstruct the axons of 6,357 projection neurons in the mouse PFC. Their paper, published in Nature Neuroscience, offers new insight that could improve the current understanding of this vital brain region.

To reconstruct axons in the mouse PFC, Gao and his colleagues used a tool they developed called “fast neurite tracer” (FNT). FNT is a software that carries out semi-automatic tracing in a 3D graphic interface, to reconstruct neuron and axon organizations in the whole brain.

The researchers used FNT to analyze images of 161 mice brains, which had been captured using fluorescence micro-optical sectioning tomography. This allowed them to reconstruct the axon morphologies of 6,357 projection neurons scattered throughout the entire mouse PFC.

“Our comprehensive analysis of axon projections unveiled 64 subtypes of PFC projection neurons within the projectome, organization rules for their soma distribution in the PFC, as well as the patterns of their cortical and subcortical projections,” the researchers wrote in their paper. “Furthermore, the study also revealed fine-grained topography at every level of the axonal projections, including primary axons, axon collaterals and terminal arbors.”

Based on their findings, Gao and his colleagues were able to identify the hierarchical order in which sub-regions of the PFC were organized with high levels of precision. This led them to draw a hypothesis of how the PFC might integrate sensory information and regulate the activity of other brain regions.

New studies could try to determine whether the principles underpinning the organization of the projection neurons in the PFC unveiled by the researchers can also be generalized to other parts of the brain. In addition, the FNT tool they developed could be used to analyze other brain regions.

“Applications of our approach to other brain regions in mice or even in primates will also undoubtedly be transformative for our understanding of the structural neural wiring of the brain that underpins diverse neural functions,” the researchers said in their paper.