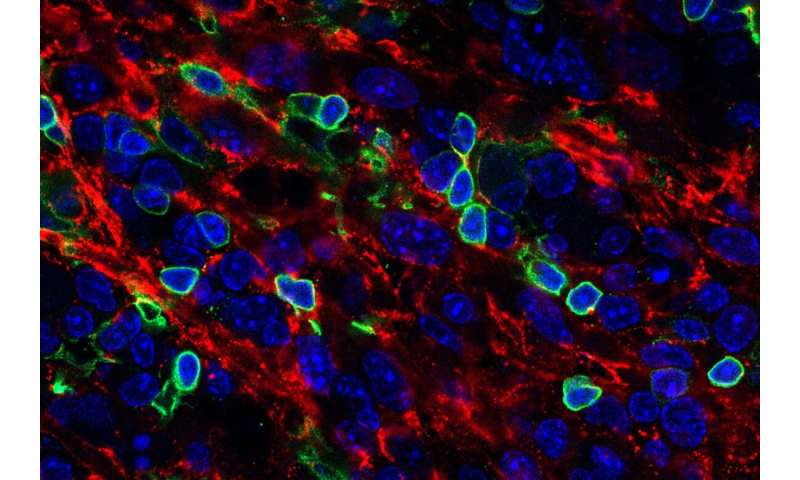 Researchers at the Eli and Edythe Broad Center of Regenerative Medicine and Stem Cell Research at UCLA have developed a way to make mouse thymus organoids that can be grown in the lab, each one about 2 millimeters in size.

The advance will enable them to follow the precise path by which T cells—critical players in the immune system—are formed from blood stem cells inside the thymus, a small gland in the middle of the chest.

In 2017, UCLA’s Dr. Gay Crooks and her colleagues developed a lab-grown human thymus organoid—a cluster of cells that mimics the thymus. Using the organoid, her team was able to coax human blood stem cells to become mature T cells. Now, they’ve repeated the experiments with mouse cells, providing researchers who rely on mouse models a new platform for studying T cells. Crooks’ team showed that a single blood stem cell is enough to generate a large number of mouse T cells of different subtypes and with different functions.

“You need T cells to be able to respond to vaccines, to fight viruses and to control cancerous changes in the body, so there’s a lot of interest in understanding how T cells are made,” said Crooks, co-director of the Broad Stem Cell Research Center and UCLA’s Rebecca Smith Professor of Pathology and Laboratory Medicine. “This is a great system to help us study that basic biology.”

T cells, also called T lymphocytes, are white blood cells that help the immune system kill cells that are infected by pathogens, activate other parts of the immune system and retain the memory of pathogens previously encountered by the cells, giving the body the ability to retain information about past pathogens. There are dozens of subtypes of T cells, and trillions of unique receptors on T cells that help them recognize foreign materials. All T cells are formed from blood stem cells in the thymus.

The approach of altering T cells’ function or increasing their production has shown some promise as a route toward future therapies for certain diseases. Scientists have worked to boost the T cells’ ability to fight cancers or infections, for example, or turned down T cells’ activity in people with autoimmune diseases.

However, research into how blood stem cells differentiate into T cells has been stymied because the cells rely on complex chemical signals from the thymus; a process that cannot be replicated easily in a lab dish or in isolated stem cells.

In the new work, published in Cell Reports, the group adapted its earlier human organoid to work with mouse stem cells. This allows a different set of observations on T-cell formation than previously possible, since some types of experiments are possible in mice but not humans.

To compensate for the differences between humans and mice, the new thymus organoid requires slightly different nutrients and signaling molecules to grow and function than the previous human organoids did. But once the researchers worked out the new recipe, the system was very effective at generating T cells.

“The main novelty with this mouse system is that we could start with one single stem cell,” said Amélie Montel-Hagen, an associate project scientist in Crooks’ lab and a co-first author of the paper along with UCLA graduate student Victoria Sun. “It’s amazing that from just one cell you can generate millions of diverse T cells.”

The researchers envision future experiments in which researchers remove or change genes thought to be important for generating T cells and use the thymus organoid to study the effect on mature T cells. While such experiments are currently possible inside genetically engineered mice, following the precise developmental paths of distinct groups of T cells is easier in an isolated laboratory system than in a living animal.