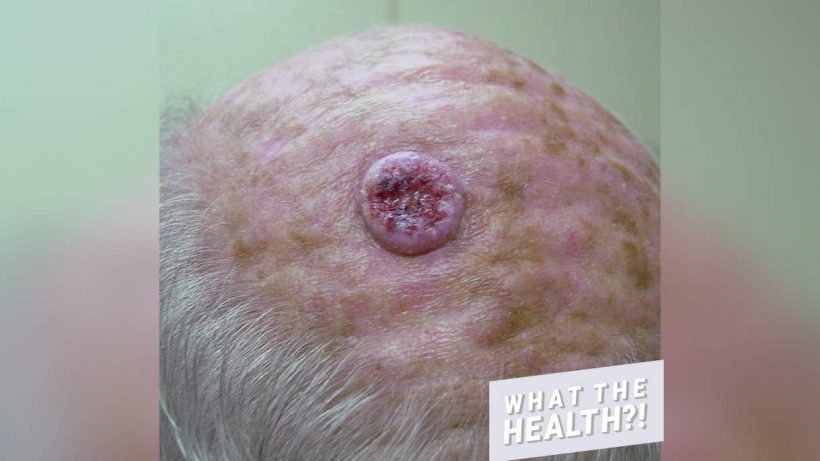 Dr. Pimple Popper, aka Sandra Lee, MD, became famous by posting graphic images of particularly gross pimples. Recently, the Los Angeles dermatologist posted a photo of something a little different: a red, puffy growth on a man’s head that was actually a type of skin cancer known as keratoacanthoma.

In her caption, Dr. Lee explained that this example of squamous cell carcinoma (a category of skin cancer that starts in the middle and outer layers of the skin) wasn’t life-threatening, but it could have grown quickly if left untreated.

Dr. Lee also posted another photo that showed how she got rid of the cancer…and to say it’s explicit would be a serious understatement. “I did Mohs micrographic skin cancer surgery on this area to ensure complete removal and sutured the area to create a linear scar,” she wrote. Basically, she cut the cancer right out of the man’s head, and she posted a photo of the gaping, bloody hole left behind.

Don’t worry, the hole wasn’t permanent. The following photo showed it all stitched up, and the next image showed that it completely healed.

This type of cancer is usually caused by excess exposure to UV rays from the sun or tanning beds, according to Mayo Clinic. That’s why growths like the one in Dr. Lee’s photo typically pop up on body areas that get lots of sun, like the top of this man’s bald head.

Other areas where cancerous growths tend to show up include the ears, lips, upper back, arms, and hands, so it’s not a bad idea to give these body regions a thorough once-over. People with fair skin or who sunburn easily are at a higher risk for developing this type of cancer, but that doesn’t mean those with darker skin are immune. All of us, no matter our skin tone, should be using sunscreen with an SPF of at least 15 all year round, according to Mayo Clinic.