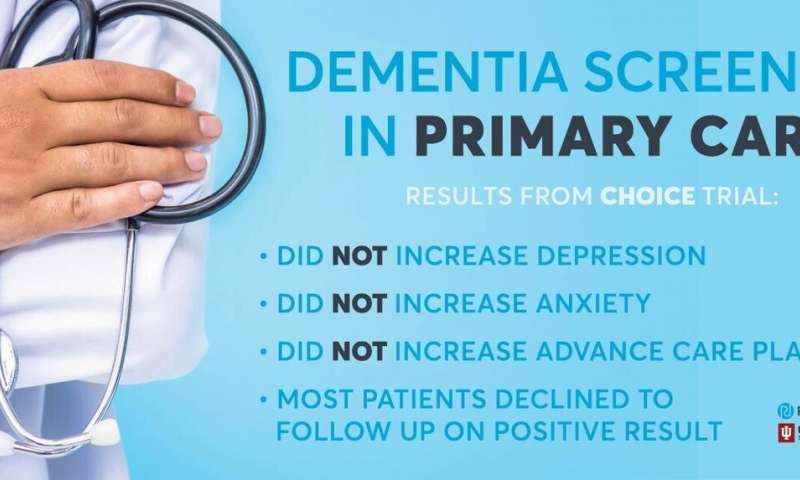 Research scientists at Regenstrief Institute and Indiana University School of Medicine have conducted the first randomized controlled trial to evaluate the pros and cons of population screening for dementia. The researchers found no harm, as measured by patient reported depressive and anxiety symptoms, from screening for Alzheimer’s disease and related dementia in diverse rural, suburban and urban primary care clinics in Indiana.

Furthermore, the trial did not identify any benefit from screening in reducing emergency department visits and hospitalizations, or increasing advance care planning.

“Many patients and families have concerns that dementia screenings may create anxiety or depression in patients because there is, as yet, no cure for this disease. However, this study shows that is not the case,” said Nicole Fowler, Ph.D., MHSA, associate director of the Indiana University Center for Aging Research at Regenstrief Institute.

Dr. Fowler, an assistant professor of medicine at IU School of Medicine and a Regenstrief research scientist, is first author of the new study, which is published in the Journal of the American Geriatrics Society.

“Dementia screening provides awareness for the patient and their family, allowing them to take action—including advance care planning—and we now know that the screening does not harm the patient. Though we found many patients declined to follow up a positive screening, the knowledge obtained from a screening at least allows them to enter a watchful waiting period or choose to be engaged,” Dr. Fowler said.

While 70 percent of study participants who screened positive for cognitive impairment declined a follow up diagnostic assessment, those who did complete a follow up and then received collaborative care had significantly decreased hospital admissions as compared with study participants who were not screened but later developed cognitive impairment. Previous studies led by IU School of Medicine and Regenstrief research scientists have found that the collaborative dementia care model decreased behavioral and psychological symptoms in patients living with dementia and reduced healthcare utilization, resulting in annual cost savings ranging from $908 to $2,856 per patient.

“For a number of reasons, including the lack of drugs to treat dementia and the stigma around the condition, people are hesitant to engage in the next steps of the process after screening,” said Dr. Fowler. “The health care system needs to help bridge this gap and encourage people to follow up on the results of screening tests as they would for any other condition.”

The study noted that “the finding of statistical equivalence of screening on patients’ symptoms of depression and anxiety” is important given that previous studies measuring the public’s perceived attitude of dementia screening reported that patients were concerned that this screening would make them feel depressed or anxious. In fact, it did not.

Dementia affects more than 5 million people in the United States and is frequently unrecognized and underdiagnosed in primary care settings, where most older adults receive their health care. It is estimated that as many as half of primary care physicians are unaware of their older patients’ cognitive status.