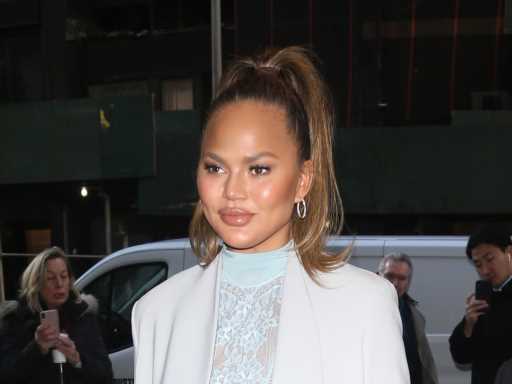 Chrissy Teigen shared a heartbreaking throwback Thursday post on Instagram yesterday that has us crying all over again. The model, cookbook author, and all-around social media gem posted photos from a video shoot for husband John Legend’s “Wild” in Mexico — the very video in which she revealed her pregnancy last year, months before losing Jack at 20 weeks.

“These are from our video shoot for Wild in Mexico,” wrote Teigen in the caption. as she lay in bed recovering from having endometriosis surgery that day. “I was 10 weeks along and out of my mind happy. I knew the video would take a bit to get together, so thought it would be cute to share our news with the world through the ol’ classic hand on belly trick at the end.”

Just 10 weeks after the happy shoot in September of last year, the unthinkable happened, and Teigen lost her baby. The loss was highly publicized, and Teigen announced it herself on her social media channels in a series of devastating photos. On Wednesday, she revealed on Twitter that the son they’d decided to name Jack would have been born this week.

“I could have never imagined what would happen over the next 10 weeks…not sure I’ll ever be able to watch that video again without sobbing but I hope he feels my tears and knows we miss him so,” she wrote on Twitter. “He would have been here any day now — if he were like Luna and Miles, I’d probably be holding him as we speak.”

The most gut-wrenching detail she revealed in this post is the fact that she regrets never looking at his face after he was born.

Grief works in such nonlinear ways, but it’s not at all surprising that Teigen is emotional this week, especially after a major surgery.

“This month is a rough reminder and to be honest, I thought the worst was over but I guess life and emotions aren’t on any sort of schedule,” she wrote. “Love you guys to pieces and am grateful for all your support and love. I firmly believe energy and healing travels through the night sky and I feel it, I promise I do. ❤️ and I love you jack. I miss you so so much.”

These other famous parents have been open about suffering miscarriages.