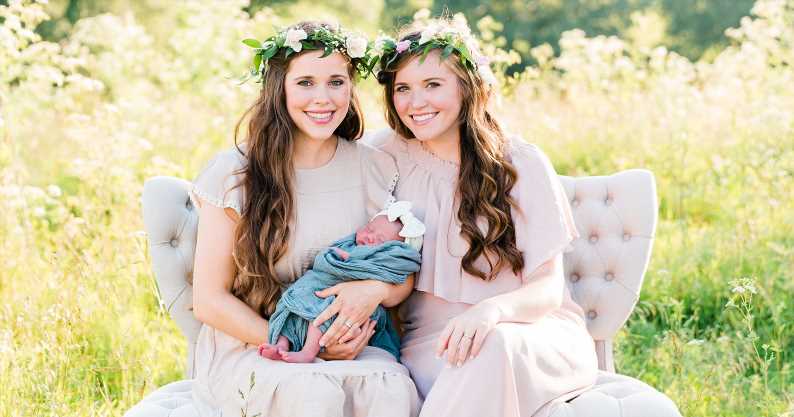 Joy-Anna Forsyth (née Duggar) is there for her sisters during their pregnancies, despite suffering a miscarriage in June.

“I thought it was going to be a lot harder being around [Kendra Duggar (née Caldwell), Abbie Duggar (née Burnett) , Lauren Duggar (née Swanson), and Anna Duggar (née Keller) … because there are three sisters that are due the same time I was,” Joy-Anna, 22, recently explained to Us Weekly exclusively. “But I was praying that the Lord would help me be excited for them. And I can honestly say that … I’m super excited for them. But I try and ask them a lot how they’re doing, how they’re feeling because this is an exciting time. They have little blessings that they’re adding to their family.”

The Counting On star’s mindset may change, though. “Meeting the babies, I feel like that may be hard,” the reality star admitted. “But it’s not like I’m upset that I’ve lost my baby. I still am excited for them. But you think, ‘What would my baby look like? What would she be like?’”

The TLC personality and her husband, Austin Forsyth, who share 20-month-old son, Gideon, announced in May that they were expecting baby No. 2. Two months later, Joy-Anna posted photos with their stillborn daughter on Instagram, writing, “Today marks one week since we heard these words. So this is your baby’s heart (pointing to the ultrasound screen). I don’t hear a heartbeat or see any movement.’ We had gone in for our 20-week ultrasound and gender reveal. It was a baby girl.”

As for the Arkansas native’s sisters, the pregnant stars are amazed by the maturity Joy-Anna has shown during such a tough time. “She wanted to feel our little girl kick the other day, and I thought that was so sweet that she can do that,” Abbie, 27, recently told Us exclusively. “She has the strength to do that.”

Keep scrolling to take a look at Joy-Anna’s maternity shoot with her fellow Counting On stars.

Counting On airs on TLC Tuesdays at 9 p.m. ET.

With reporting by Carly Sloane