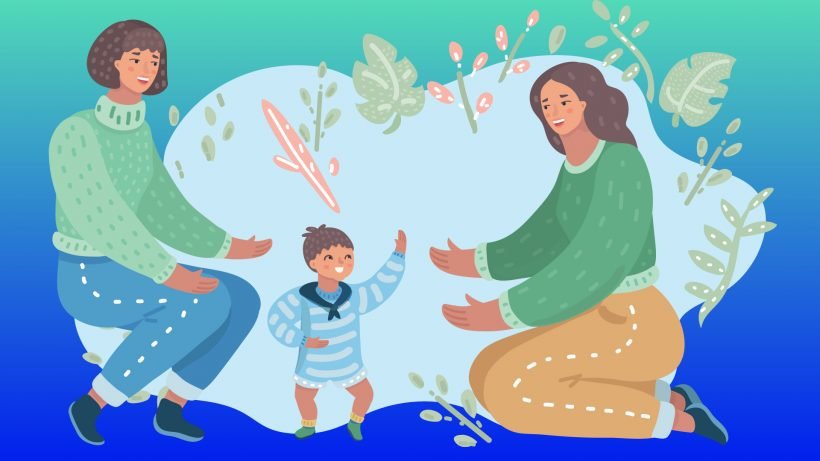 “And who is the father?” The question always stings me like a hornet. It’s the question my wife and I dreaded for years since we first started talking about the possibility of having a child — and then watched and felt him grow from gamete to fetus to screaming newborn baby. It’s an ignorant question. And it especially hurt to hear it as my wife held our 1-day-old son in our pediatrician’s office. And can you believe it? It was our doctor asking this question.

“There is no father,” I answered. “There’s a sperm donor. And two moms.”

We knew in that instant we would never return to that doctor even though he had come highly recommended by someone we loved and trusted (who, however, was straight — no fault of theirs). The emotional damage of this first doctor’s visit couldn’t be undone. The hormones and emotions were flying just one day after welcoming our baby into the world, and this crude misstep on behalf of a medical professional put up a wall in our hearts. We had anticipated it might happen, just not quite this soon. And we knew this ignorant question would be far from the last.

We would proceed to get a host of quizzical looks and comments and questions during the next months in our baby’s life. Complete strangers in stores and parking lots, in line at the grocery store, asking intensely intimate questions they probably wouldn’t dare ask a friend or family member but somehow felt emboldened to ask us.

“Which one of you is the mother?” was the most common.

“Which one of you is the real mother?”

“If you’re both the moms, who is the father?”

I wish I had the temerity to stop a complete stranger in a public setting and ask about their internal organs or their genetic makeup. “Do you have both kidneys?” I might ask. “Have you ever gotten your 23rd chromosome checked out? You seem a little off, and it could be that.”

In any other scenario, it would be completely inappropriate to ask such deeply personal questions, and it baffles me that speaking to LGBTQ parents seems to be the accepted societal exception. Why? The LGBTQ parenting struggles begin well before pregnancy (and where on Earth is the maternity-wear for queer folks?) and continue (hi, having to adopt my biological child) seemingly forever. And judging nontraditional families is so common, in fact, that some of us who identify as LGBTQ have internalized the homophobia and heterosexism to the point that we spew out the same epithets.

That’s precisely what happened to poor Stephanie Fairyington as she shared in her New York Times piece that asks: Can there really be two moms? In the piece, she explains that her toddler seems to favor the gestational mom, and she wonders whether that’s because of their genetic connection. Is there actually no room for two moms in the equation? She wonders. Am I ‘the dad’ in this family?

The piece caused a stir on the LGBTQ forums, and I watched sadly as other young, less empowered and more ill-informed same-sex moms started to worry they may be lacking something — that they too may somehow be less than the “official” (i.e., gestational) mother.

So let me say this: No, Stephanie, you’re not the dad. You never were, and you never will be (unless you have decided you identify as a man, but since you reiterate your woman identity in the piece — “I never wanted to be a woman more than when I became a mom” — I gather that’s not the situation).

It may seem obvious, but based on recent discourse, it clearly needs restating: No lesbian mom is a dad unless she identifies herself as one. And not only does neither Stephanie’s kid nor my kid have a dad; they also don’t need one.

Two moms are fabulous — twice the love and nurturing and maternal instincts (not that a Dad couldn’t inhabit these traits).

The only reason our child (or we) might feel something is missing in a two-parent, nonheterosexual family arrangement is because we’ve been made to feel that way by other people who won’t accept us. It is purely a fear of deviating from homogeny that precipitates fierce backlash to anything that’s different.

Study after study, like this one published in Pediatrics and more than 70 other studies, have shown that children raised by same-sex parents are just as healthy and well-adjusted as (if not better so than) those raised by opposite-sex parents. And yes, that includes those kids with zero dads.

I want my son to be learn about and know different positive male role models in the same way I want him to learn about and know people who are young and old, Black and brown, Jewish and Buddhist and Catholic and Muslim, white-collar and blue-collar, rich and poor and everything in between. I want him to know men who have vaginas and women with testes. I want him to be exposed to the beautiful diversity in this world and to respect and learn from the differences that make us unique.

Sure, dads can be great, and many kids are lucky to have one. But my kid doesn’t, and that’s more than OK.