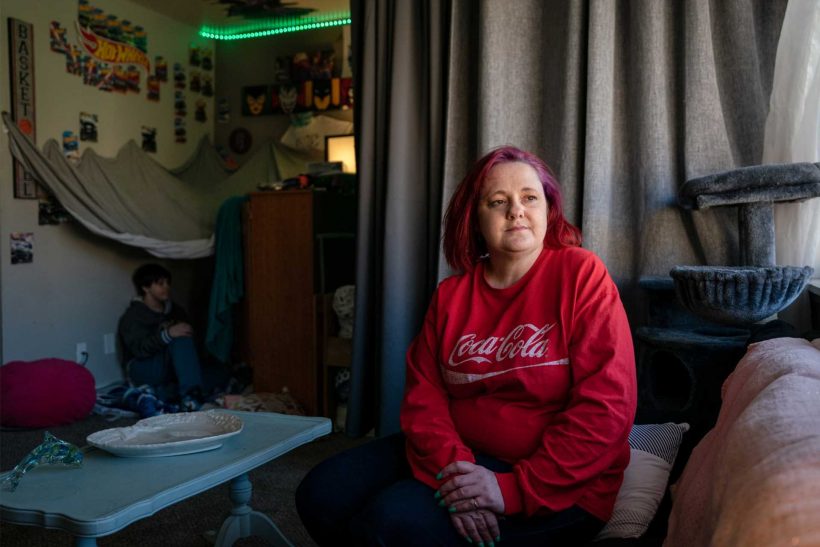 Korra Elliott has tried to avoid seeing a doctor while waiting to get on Medicaid. She worries she can’t afford more bills without any insurance coverage. But in early March — five months, she said, after applying and with still no decision about her application — a suspected case of the flu sent her blood pressure soaring and landed her in the emergency room.

The 28-year-old mother of four from Salem, Missouri, is among the tens of thousands of uninsured Missourians stuck waiting as the state slogs through a flood of applications for the state-federal health insurance program. Missouri expanded the program last year after a lengthy legal and political battle, and it now covers adults who earn up to 138% of the federal poverty level — about $18,800 annually for an individual.

Missouri had nearly 72,000 pending Medicaid applications at the end of February and was averaging 119 days to process one, more than twice the maximum turnaround time of 45 days allowed by federal rules. Adding people to Medicaid is labor-intensive, and the jobs require training and expertise. The program covers many populations — children, people with disabilities, seniors, adults who are pregnant or have children, and some without children. Different rules dictate who qualifies.

Missouri simply doesn’t have the workers to keep up. Last fiscal year, 20% of its employees who handled Medicaid applications left their jobs, said Heather Dolce, a spokesperson for the Missouri Department of Social Services. And the average number of job applications received for each opening in the department’s Family Support Division — which oversees enrollment — dropped from 47 in March 2021 to 10 in February 2022.

Just about every industry is struggling to find workers now, but staffing shortages in state Medicaid agencies around the country come at a challenging time. States will soon need to review the eligibility of tens of millions of people enrolled in the program nationwide — a herculean effort that will kick off once President Joe Biden’s administration lets the covid-19 public health emergency declaration expire. If Missouri’s lengthy application backlogs are any indication, the nation is on course for a mass-scale disruption in people’s benefits — even for those who still qualify for the insurance.

“If you don’t have people actually processing the cases and answering the phone, it doesn’t matter what policies you have in place,” said Jennifer Wagner, director of Medicaid eligibility and enrollment for the Center on Budget and Policy Priorities, a left-leaning think tank in Washington, D.C.

Federal officials have said they will give states 60 days’ notice before ending the public health emergency, so it’s unlikely to expire before summer. Once it does, enrollees won’t be kicked off immediately: States can take up to 14 months to complete renewals, although budget pressures may push many to move faster. A bump in federal Medicaid funds to states, provided by Congress through covid relief legislation in 2020, will end shortly after the emergency’s expiration.

Ultimately, workers are needed to answer questions, process information confirming someone’s Medicaid enrollment should be renewed, or see whether the person qualifies for a different health coverage program — all before the benefits lapse and they become uninsured.

State Medicaid officials have said staffing is one of the top challenges they face. In a January meeting of the Medicaid and CHIP Payment and Access Commission, an outside panel of experts that advises Congress, Jeff Nelson said 15% to 20% of the Utah Department of Health’s eligibility workers were new. “We’ve got a fifth of the workforce that potentially doesn’t know what they’re doing,” said Nelson, who oversees eligibility for Utah’s Medicaid program.

Eligibility worker vacancies at the Texas Health and Human Services Commission quadrupled over roughly two years — 1,031 open positions as of late February compared with 260 as of March 31, 2020, according to spokesperson Kelli Weldon.

Medicaid renewals are less labor-intensive than initial applications, but it takes time before an eligibility worker knows the ins and outs of the program, Wagner said.

“It’s months before you are fully functional,” said Wagner, who previously oversaw the Illinois Department of Human Services’ offices that determine applicants’ eligibility for Medicaid, the Supplemental Nutrition Assistance Program that provides food stamps, and other assistance programs.

Other social services may be gummed up in the process because many workers also handle applications for other programs. In addition to Medicaid, workers for Kentucky’s Department for Community Based Services handle SNAP and child care assistance applications.

Consumer advocates who connect people to safety-net programs worry that an overwhelmed workforce won’t be able to keep up.

“It’s going to be a lot of work for everyone,” said Miranda Brown, who helps people apply for benefits as outreach coordinator for the Kentucky Equal Justice Center, a legal aid group.

Brown said she recently called a state office on behalf of a client toward the end of the day. She waited on hold for an hour only to be told by a caseworker that the agency couldn’t process any more cases that day.

“I even have a [phone] line that I get through faster than a consumer calling for themselves,” she said. “If it’s hard for me, it’s very hard for consumers who are trying to call on their lunch break at work.”

South Carolina planned to hire “a couple hundred workers” beginning this spring to help manage renewals at the end of the public health emergency, said Nicole Mitchell Threatt, deputy director of eligibility, enrollment, and member services at the Department of Health and Human Services. The turnover rate among eligibility workers was about 25% from July 2020 to June 2021, jumping from a 15% rate in the previous 12 months.

In Missouri, Dolce said her department hopes a recently approved pay increase will help recruit more workers and improve staff morale and retention. The department is being sued over delays in enrollments for SNAP benefits, which it also oversees.

Kim Evans, director of the Missouri Department of Social Services’ Family Support Division, told the state Medicaid oversight committee in February that her division was offering overtime and she was even offering to buy pizza to speed up the processing of applications. But the department is enrolling fewer than 3,000 people per week, leaving tens of thousands waiting and delaying their care.

In the suburbs of Kansas City, Missouri, Stacey Whitford, 41, applied in December for Medicaid for herself and her 13-year-old son. Her son needs hearing aids that she said cost $2,500 apiece without insurance. She also lined up a support worker for the boy, who has autism, through the Department of Mental Health but said she was told the worker can begin only once her son is enrolled in Medicaid.

“It’s just like hanging a golden ticket right in front of your face and saying, ‘Here it is, but you can’t touch it,’” she said in early March.

Whitford spent hours on the phone trying to sort out the status of their applications, then on March 31, just shy of four months after applying, they were finally approved. 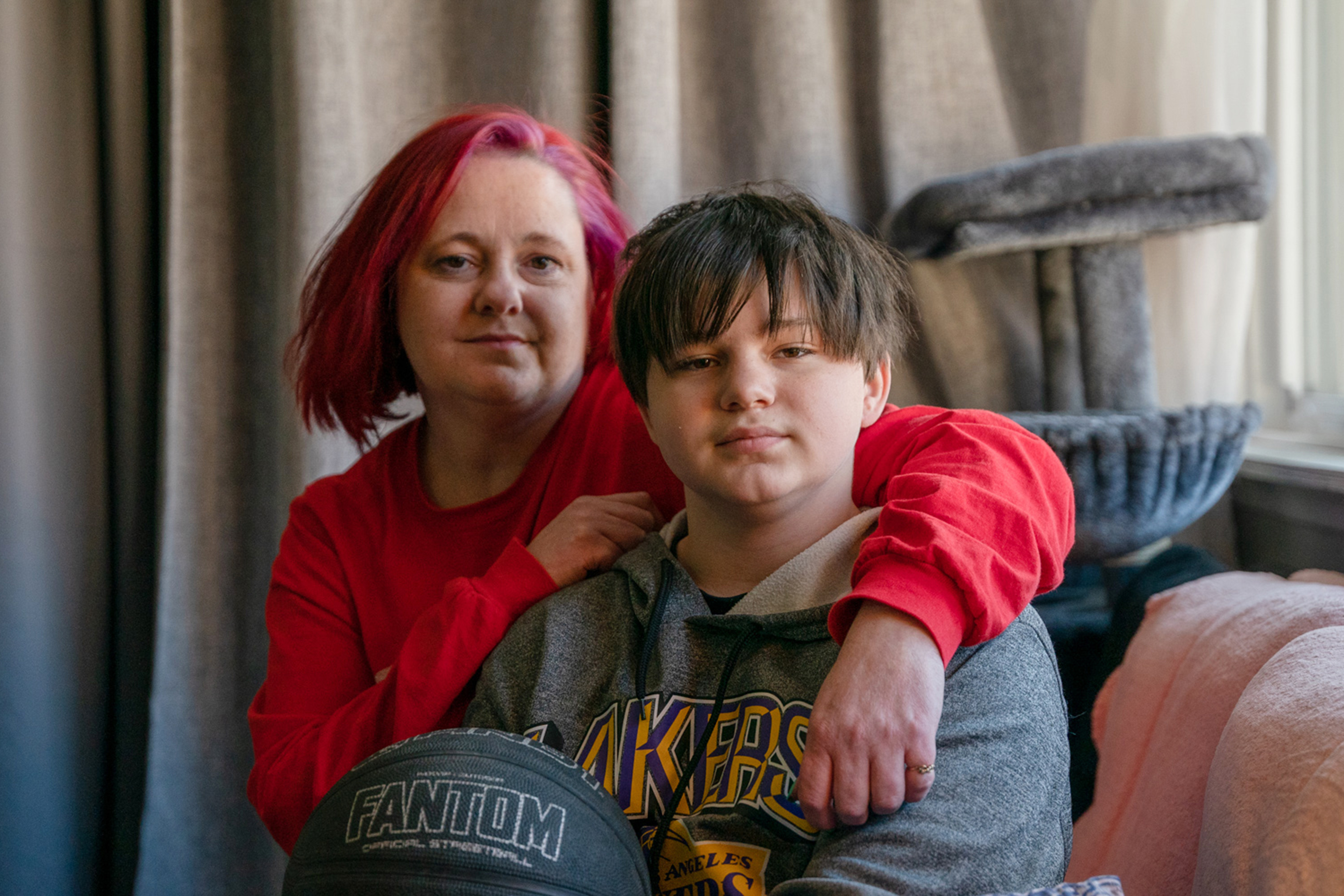 “I am so excited! We can run with scissors now,” she joked.

But Elliott, the mother of four in Salem, is still waiting. She gave up calling the state’s Medicaid helpline after growing frustrated from spending hours on hold and being disconnected because of high call volumes. Instead, she checks on her application through the enrollment specialists at the clinic where she applied.

She was sent home from the ER with ibuprofen and Tamiflu and has yet to see a bill. If her Medicaid application is approved, her coverage will be backdated to the month she applied, likely covering her ER trip. But if her application is rejected, that cost will be added to her medical debt, which Elliott estimates is already tens of thousands of dollars.

“It makes me feel like it’s a joke,” Elliott said of Missouri’s expansion of Medicaid. “Like they’re just throwing it out there to get all these people to apply for it, but they’re not going to really help anybody.”