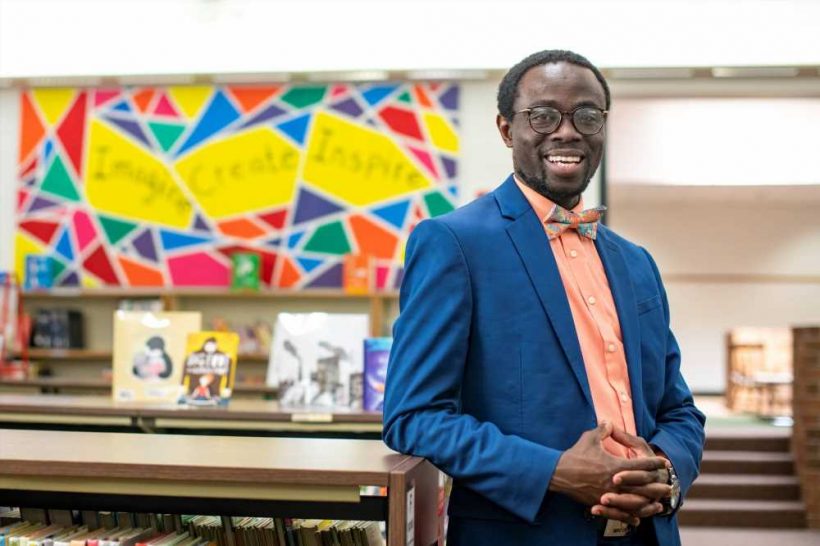 As a young boy living in what was then Zaire, Bertine Bahige remembers watching refugees flee from the Rwandan genocide in 1994 by crossing a river that forms the two Central African nations’ border.

“Little did I know that would be me a few years later,” said Bahige.

Bahige’s harrowing refugee journey began when he was kidnapped and forced to become a child soldier when war broke out in his country, which became the Democratic Republic of Congo in 1997. He escaped at age 15 to a Mozambique refugee camp, where he lived for five years until he arrived in Baltimore in 2004 through a refugee resettlement program.

Bahige, now 42, said the way he grew up was to “just buckle up and tough it out,” and he carried that philosophy into adjusting to life in the U.S. He worked multiple jobs and took community college classes until he went to the University of Wyoming on a scholarship. He is now an elementary school principal in Gillette, Wyoming, and said his coping strategy, then and now, is to keep himself busy.

“In retrospect, I don’t think I ever even dealt with my own trauma,” he said.

Refugees are arriving in the U.S. in greater numbers this year after resettlement counts reached a 40-year low under President Donald Trump. These new arrivals, like those refugees before them, are 10 times as likely as the general population to have post-traumatic stress disorder, depression, and anxiety. Many of them, like Bahige, fled their homelands because of violence or persecution. They then must deal with the mental toll of integrating into new environments that are as different as, well, Wyoming is from Central Africa.

This has Bahige concerned about the welfare of the new generation of refugees.

“The type of system that a person lived in might be completely different than the new life and system of the world they live in now,” Bahige said.

While their need for mental health services is greater than that of the general population, refugees are much less likely to receive such care. Part of the shortfall stems from societal differences. But a big factor is the overall shortage of mental health providers in the U.S., and the myriad obstacles and barriers to receiving mental health care that refugees encounter.

Whether they end up in a rural area like the Northern Rocky Mountains or in an urban setting such as Atlanta, refugees can face months-long waits for care, plus a lack of clinicians who understand the culture of the people they are serving.

Since 1975, about 3.5 million refugees have been admitted to the United States. The annual admissions dropped during the Trump administration from about 85,000 in 2016 to 11,814 in 2020, according to the State Department.

President Joe Biden raised the cap on refugee admissions to 125,000 for the 2022 federal fiscal year, which ends Sept. 30. With fewer than 18,000 arrivals by the beginning of August, that ceiling is unlikely to be reached, but the number of people admitted is increasing monthly.

Refugees receive mental health screening, along with a general medical assessment, within 90 days of their arrival. But the effectiveness of that testing largely depends on a screener’s ability to navigate complex cultural and linguistic issues, said Dr. Ranit Mishori, a professor of family medicine at Georgetown University and the senior medical adviser for Physicians for Human Rights.

Although rates of trauma are higher in the refugee population, not all displaced people need mental health services, Mishori said.

For refugees dealing with the effects of stress and adversity, resettlement agencies like the International Rescue Committee provide support.

“Some folks will come in and immediately request services, and some won’t need it for a few years until they feel fully safe, and their body has adjusted, and the trauma response has started to dissipate a little bit,” said Mackinley Gwinner, the mental health navigator for the IRC in Missoula, Montana.

Unlike Bahige’s adopted state of Wyoming, which has no refugee resettlement services, IRC Missoula has placed refugees from the Democratic Republic of the Congo, Syria, Myanmar, Iraq, Afghanistan, Eritrea, and Ukraine in Montana in recent years. A major challenge in accessing mental health services in rural areas is that very few providers speak the languages of those countries.

In the Atlanta suburb of Clarkston, which has a large population of refugees from Myanmar, the Democratic Republic of the Congo, and Syria, translation services are more available. Five mental health clinicians will work alongside IRC caseworkers under a new program by the IRC in Atlanta and Georgia State University’s Prevention Research Center. The clinicians will assess refugees’ mental health needs as the caseworkers help with their housing, employment, education, and other issues.

Seeking mental health care from a professional, though, can be an unfamiliar idea for many refugees, said Farduus Ahmed, a Somali-born former refugee mental health clinician at the University of Colorado School of Medicine.

For refugees needing mental health care, stigma can be a barrier to treatment. Some refugees fear that if U.S. authorities find out they’re struggling with mental health, they could face deportation, and some single mothers worry they will lose their children for the same reason, Ahmed said.

Long wait times, lack of cultural and language resources, and societal differences have led some health professionals to suggest alternative ways to address the mental health needs of refugees.

Widening the scope beyond individual therapy to include peer interventions can rebuild dignity and hope, said Dr. Suzan Song, a professor of psychiatry at George Washington University.

Spending time with someone who shares the same language or figuring out how to use the bus to go to the grocery store are “incredibly healing and allow someone to feel a sense of belonging,” Song said.

In Clarkston, the Prevention Research Center will soon launch an alternative allowing refugees to play a more direct role in caring for the mental health needs of community members. The center plans to train six to eight refugee women as “lay therapists,” who will counsel and train other women and mothers using a technique called narrative exposure therapy to address complex and multiple traumas.

The treatment, in which patients create a chronological narrative of their lives with the help of a therapist, focuses on traumatic experiences over a person’s lifetime.

The therapy can be culturally adapted and implemented in underserved communities, said Jonathan Orr, coordinator of the clinical mental health counseling program at Georgia State University’s Counseling and Psychological Services.

The American Psychological Association, though, only conditionally recommends narrative exposure therapy for adult patients with PTSD, advising that more research is needed.

But the method worked for Mohamad Alo, a 25-year-old Kurdish refugee living in Snellville, Georgia, after arriving in the U.S. from Syria in 2016.

Alo was attending Georgia State while working full time to support himself when the covid-19 pandemic started. While downtime during the pandemic gave him time to reflect, he didn’t have the tools to process his past, which included fleeing Syria and the threat of violence.

When his busy schedule picked back up, he felt unable to deal with his newfound anxiety and loss of focus. The narrative exposure therapy, he said, helped him deal with that stress.

Regardless of treatment options, mental health is not necessarily the top priority when a refugee arrives in the United States. “When someone has lived a life of survival, vulnerability is the last thing you’re going to portray,” Bahige said.

But Bahige also sees resettlement as an opportunity for refugees to address their mental health needs.

He said it’s important to help refugees “understand that if they take care of their mental health, they can be successful and thrive in all facets of the life they’re trying to create. Changing that mindset can be empowering, and it’s something I am still learning.”