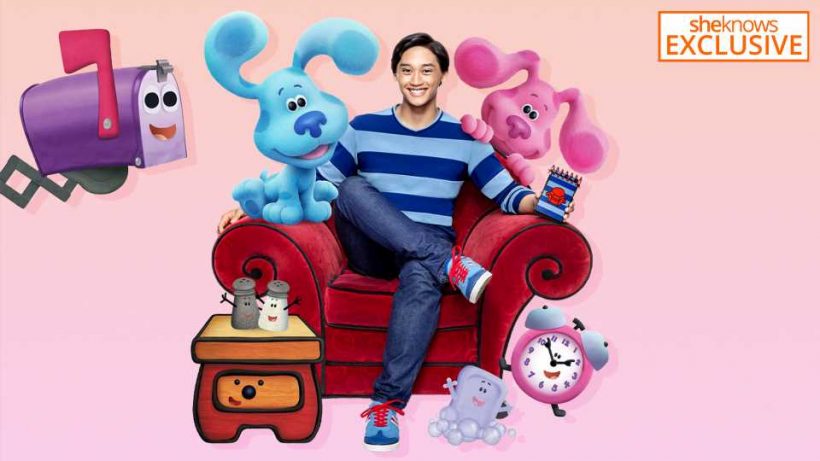 Do you remember the first time someone on your TV talked to you? Depending on your age, it may have been Mr. Rogers, or Zack on Saved by the Bell. Or maybe it was Steve from Blue’s Clues.

For your kids, it was probably a family member on Facetime. So, do today’s children still enjoy the thrill of having a TV star break the fourth wall? Considering the high ratings of the new Blue’s Clues & You!, the answer is yes. In fact, I was shocked to discover my 7-year-old glued to the show, which is aimed at the 5 and under set. Considering how many fast-paced, flashy viewing options kids have these days, it seems miraculous that a simple, relatively quiet show that looks almost exactly like the original Blue’s Clues of 1996 can hold children’s attention, but it really does.

One of the reasons is the captivating, expressive face of new host Josh Dela Cruz, who left a career on Broadway (he was the Aladdin understudy for five years) for this important post. With his striped shirt, a notebook (which is now a tablet) and guitar, he navigates a two-dimensional world and follows the clues his puppy dog friend leaves behind, asking viewers for their help along the way. Of course, credit also goes to series creators Traci Paige Johnson (who voices Blue) and Angela Santomero. Those two also created Daniel Tiger’s Neighborhood, Super Why and Creative Galaxy before returning to Nickelodeon for this reboot.

In a special episode airing this Friday, Samantha Bee, Rachel Dratch, Laurie Hernandez, Alexa PenaVega, Carlos PenaVega, Kal Penn and Pete Wentz are all appearing on the show to wish Blue a happy birthday. Before the big day, SheKnows caught up with Dela Cruz to find out how he connects to our kids so well, and whether we can use some of his secrets to entertain them too.

SheKnows: How did you wind up the host of Blue’s Clues? Did you know children’s TV was something you wanted to do?

Josh Dela Cruz: I don’t know that I ever thought I would be in children’s television, especially Blue’s Clues, [which] was such a big part of my childhood, because I watched it with my little sister. …

I was fortunate enough to book my, my first Broadway show, Aladdin, and I was with the show, five years and I loved every single day. Then one day I was starting to think, “I still love work. I still have a great time. I’m so grateful for it, but I feel like I want something more, something else.” … And then my agent sent me an audition for Blue’s Clues.

You’re invited to celebrate Blue’s birthday this Friday at 11a/10c on @Nickelodeon! 🎈

SK: Was there something about being in Aladdin that prepared you to talk to kids on the show?

JDC: Aladdin did me such a service, because I was able to play with the audience. I was able to have the audience in my head and feel their energy, bounce off their energy and really work on my timing and trusting myself and my instincts. Because when you get to [the Blue’s Clues] set, everybody has to be quiet, so even if it’s funny, nobody’s laughing, and you just have to trust it.

SK: Do you have to perform in a specific way to get kids to pay attention to you? As a parent, I want to know if there’s some skill I can learn to do that too!

JDC: Everything is done with the kid in mind to make sure that they are benefiting from this material. …

I was able to get advice from Steve Burns, the original host, and from Donovan Patton, who played Joe after him. When I met them, they said, “When you’re talking into the lens, it’s not just the generic ‘Kid’ that’s watching at home. It’s an actual person who is living, breathing and listening to you, so find a way to personalize who’s on the other side of that glass.” … I’m improvising with that kid that’s on the other side of the glass, wherever they are in the world, and they are the expert in whatever it is that we’re doing.

SK: Have you been able to get feedback from kids since the show premiered in November?

JDC: It’s really, really cool. My friends have kids and their friends have kids, and every once in a while, I get texts or videos of them watching the show, and I’m just floored because they’re engaged and they’re talking to the screen.

One of my friends told me that their kid pointed to the screen and said, “He looks like me!” That took me out. I didn’t really get a chance to experience anything in that capacity growing up.

SK: Can you say anything else about what it’s like to be the first Asian America to host the show?

JDC: Coming out of school, all I ever wanted to be was “ethnically ambiguous” so that I could play anything. Now in my adulthood, I realize that it’s not your ethnicity that is the problem. Take pride in who you are, you’re a Filipino American, and all you can do is do your best work.

SK: What should kids and parents look forward to in this special “Happy Birthday, Blue” episode?

JDC: It’s going to be such a fun episode. I’m really excited for everyone to hear our take on the birthday song. Hopefully that will be a new anthem that everyone will be singing at every birthday.

New episodes of Blues Clues & You! air at 11 am on Fridays on Nickelodeon.