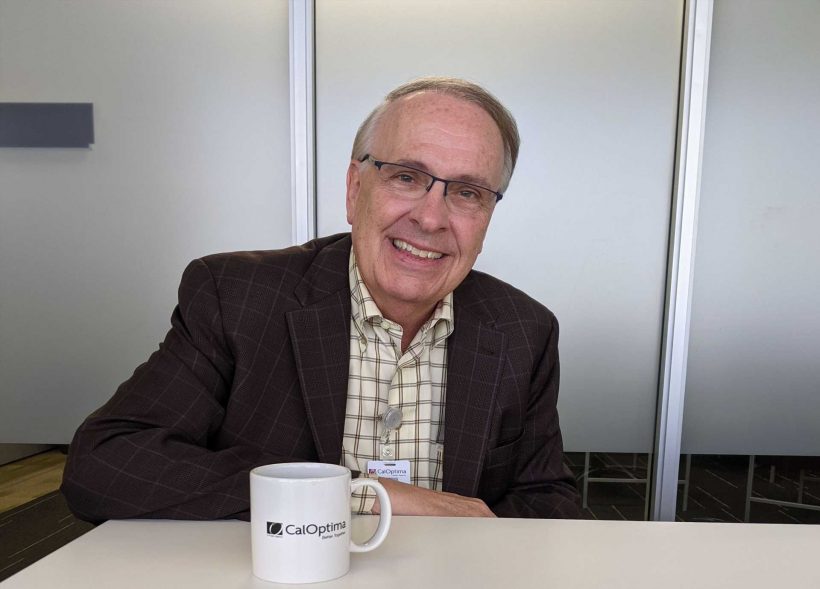 ORANGE, Calif. — For Michael Hunn, the path from priesthood to health care was seamless.

Hunn, a native of St. Louis, counseled hospitalized patients as a Catholic priest in the 1980s before leaving the clergy and shifting to health care administration. Over the next three decades, he was CEO of nine different hospitals — in California, Texas, and Missouri — among other senior executive positions. Across his unusual trajectory, there’s been a common thread: a desire to help people.

“It was always in me to want to do that,” said Hunn, 66, who remains a devout Catholic. He asked the church to release him from clerical duties when he decided to pursue a lay life and the opportunity to marry.

Hunn stepped in late last year as CalOptima’s interim CEO after the previous chief executive, Richard Sanchez, retired. Board members praised Hunn’s leadership and said his decades of health care experience made him the right person to guide the agency through massive changes coming to Medi-Cal.

CalOptima, one of the state’s largest Medi-Cal plans, serves 882,000 members — over a quarter of Orange County’s population. Many enrollees need help with housing and employment, in addition to medical and mental health care. CalOptima, like all other Medi-Cal plans, has committed to participating in a new initiative, California Advancing and​ Innovating Medi-Cal, or CalAIM. The $6 billion experiment is intended to provide vulnerable enrollees with nontraditional services — such as housing and food assistance, detoxification, and home modifications — that can improve their health.

Hunn, who studied health care ethics as a seminary student and frequently consulted on end-of-life decisions while making hospital rounds as a priest, said he’s using CalAIM to provide CalOptima members with housing assistance and recuperative care, which gives patients — some of them homeless — a respite after they’re discharged from the hospital. More services could be added later.

Meanwhile, the state is seeking greater oversight of all Medi-Cal health plans, which could put pressure on Hunn. The California Department of Health Care Services, which runs Medi-Cal, is working up new health plan contracts that will increase regulations and establish stricter reporting requirements starting in 2024. And CalOptima could face competition for the first time if the state allows Kaiser Permanente to jump into the fray as planned.

There are times when Hunn’s duties at CalOptima conflict with his religious creed. Medi-Cal pays for reproductive care, such as abortions, that is banned by Catholic health doctrine. And it covers doctor visits and lethal drugs for terminally ill patients who choose to end their lives, an act the Vatican has called “intrinsically evil.”

KHN reporter Bernard J. Wolfson sat down with Hunn in his office on the ninth floor of CalOptima’s headquarters to talk about his transformation from priest to health care executive and the changes in Medi-Cal. The interview has been edited for length and clarity.

Q: Did you ever consider a more hands-on role in health care — becoming a doctor, for example?

Before I went into the theologate, I did pick up an application for Saint Louis University medical school. I seriously thought maybe I should pursue medicine, because I loved it so much having worked in the hospitals. I prayed about it. I talked to my mother, primarily, about it. She said, “Follow your heart. Do what you think is right for you, but I think the church is calling you.”

Q: How do you reconcile your Catholic faith with running an organization that pays for reproductive and end-of-life care?

I am not a moral arbiter for another’s decision, so I set that aside and leave what I believe at home. On the professional side, I will fulfill the responsibility and duty as required.

Q: The Kaiser Permanente deal with the state, if approved, would take patients and revenue away from CalOptima. And because KP can essentially select the Medi-Cal members it wants, it could leave you with a larger proportion of high-cost patients. What worries you most about the deal?

It would have been preferable if the discussion about a direct contract had had more opportunity for input and dialogue versus a kind of surprise announcement. We don’t want a two-tier health system created. Tier one would be, “If you come to Kaiser, we’re going to select who we want to have in our network.” Tier two is everybody else.

If it does proceed, we will do everything in our power to make sure it is seamless for the member.

Q: What do you think of the state’s new Medi-Cal prescription drug program under Magellan Health?

These major statewide initiatives always start off with bumps. There were IT bumps and on the Magellan side some staffing bumps. I think one of the keys was the call wait times, and there was some work that needed to be done with the formulary.

But the volume of calls about it from our members is steadily dropping. We still field about 30 calls a day, which is way down. At the height, it was well over 100 a day. It’s smoothing out.

Q: There’s a big push in California for greater equity in health care, and Medi-Cal plans are being required to hire chief equity officers. Do you have one?

We’re just now finishing a job description, and we will post that position and start looking for candidates. We can actually heat-map where there are disparities and what we suspect to be food insufficiency, unemployment, lack of access to fresh fruits and vegetables. It’s unbelievable the data that’s out there. I want the equity officer to be able to look at that and say strategically, “We’ve got a hole right here. What are we doing here, because we’re missing it?”

Q: Let’s talk about CalAIM. Which of its 14 nontraditional services is CalOptima providing at this point?

We have started doing housing deposits for CalOptima members who are eligible. We’re also beginning to work on collaborative housing navigation, where we will navigate our members to community support services that get people placed into housing.

Another big piece in CalAIM that we are also working on is recuperative care.

Q: Can you explain what that is?

Recuperative care is pretty basic. It is for individuals who most times are coming from a hospital. They are sometimes homeless or unhoused, and they literally need a place to recuperate. They are not quite ready to go back to a shelter and certainly not back to the streets.

While they’re there, staff will work to get them hooked up for housing navigation, job placement, behavioral and mental health services. They have a medical facility on-site so they can see a doctor; they have dentistry to deal with teeth.

Anybody who’s homeless in Orange County is going to have eligibility for CalOptima because they don’t have resources.

I went out on the homeless count in the city of Fountain Valley, and I met face to face with our homeless in their cars, in their vans, in the dirt, in the parks, under the bridges, in their tents, behind buildings, behind dumpsters. And every individual — that’s our member.