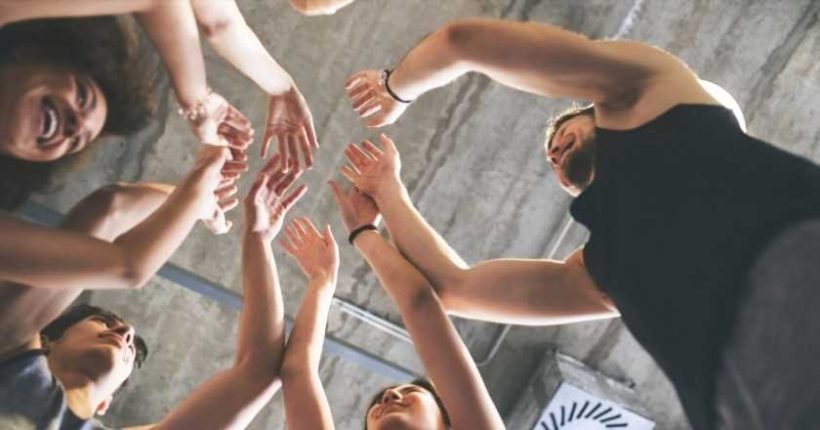 Losing her mum at 23 left Katie Wilson feeling like she no longer had family. Then she discovered the magic of small group PT sessions at the gym and suddenly, she had a ready-made community around her offering financial support, spare beds and friendship.

Last month, my mum passed away aged 54 due to acute myeloid leukaemia. Though it had been a long illness and her death wasn’t necessarily a ‘shock’, nothing can prepare you for the loss of a parent in your early twenties.

My mum and I were extremely close. We spent almost every day together. She was my confidante, best friend, and the only person I really relied on. In many ways, it was us against the world.

Sobbing in spin, screaming while strength training: how we’re finally starting to use fitness for grief

As I have no siblings and my grandparents had already passed away, I thought of my mum as my entire family.

While I cherished our relationship whilst she was alive, the most overwhelming part of the grieving process hasn’t necessarily been about losing my mum, but the feeling that by losing her, I’ve lost my whole family.

We think of family as the only constant in our lives, the only thing that really matters, beyond career or financial success. The saying ‘blood’s thicker than water’ highlights that the bond between family is more important than all others.

This phrase would creep into my mind at my lowest points, as I’d worry that the generosity and love shown by my friends would eventually run out if I stayed miserable for too long.

The biggest challenge of grief was learning to reach out to others and accept their help.

At the beginning of 2022, I’d started spending weekends doing small group personal training (SGPT) at the Training Club and Studio6 – single-sex gyms that often come together to collaborate on challenges like climbing the Yorkshire Three Peaks, which we completed only a week before my mum’s passing.

It was a member of the SGPT I called straight after my mum died. My mum’s car was parked in the hospital car park and I needed help moving it and returning it to the car dealership. I didn’t fancy being ripped off by a car dealer on top of everything else that day, so wanted some company.

Marco, the Training Club’s brand director, arrived within half an hour. He returned the car and did all the talking at the dealership, which ticked off the first item on a long practical and emotional to-do list.

While that might be quite an extreme and specific example of the kind of camaraderie you can find at SGPT, the joy of being part of this kind of group is that each member brings with them a different value that goes way beyond spotting a bench press.

It was at SGPT that I found someone else who’d lost a parent early on and who offered me the kind of support that other, longer-term mates couldn’t. They become a vital part of my grieving process; it was important to have a friend who could reassure me that there was no ‘normal’ or ‘correct’ way to grieve, but who also served as living proof that you can go on living when a parent dies. It made the journey ahead look like a steep, rocky hill, rather than an impossibly high mountain.

And then there was the general and genuine care shown to me by members of the gym, which went beyond emotional support.

Jay, a particularly finance-savvy member, advised me on how to deal with mum’s estate. He answered my questions and broke down jargon, so that the financial side of death never overwhelmed me.

Katie joined small group personal training at a gym which runs challenges in partnership with another local studio.

On important days like my mum’s funeral, I woke up to messages from the coaches, who would let me know that they were thinking of me. To get through the day, I’d combine their encouragement with the tough-love that older members of the gym would offer.

The biggest display of generosity, however, came from the member who offered me their spare bed on the days when it all got too much and I didn’t want to be in the house alone.

During those first few weeks, unsurprisingly, I didn’t feel like exercising. Getting out of bed and surviving the day felt like a workout in itself. But this didn’t mean I stayed away from the gym.

I’d spent hours there, sat on a beanbag with my laptop, doing small pieces of work and planning the funeral. I had conversations with the coaches about how Studio6 imagined my future training plan, which helped me imagine a future where I was carrying on without my mum.

When Mother’s Day came around – the calendar date I was dreading most – the community came together in the most unforgettable way to support me. It helped me survive not only the day itself, but showed me that significant calendar dates are not to be feared, as I wouldn’t be facing them alone.

On Mother’s Day, the gyms came together to throw a big meal – including mums, grandmothers and people who had neither.

The Training Club and Studio6 organised a large group meal, inviting along everyone’s mums and grandmothers who were around, and bringing along people like me who had no one to celebrate with.

There were bittersweet moments, like when the coaches’ mums were sharing funny stories about them as children, but the day was filled with laughter and a feeling of togetherness. By just being around friends and mother figures, I felt like part of one big family.

Since her mum died, Katie’s found herself surrounded by a ‘found family’ of like-minded gym-goers.

Gyms and training groups may not seem like the logical places for empathy and emotional support. If someone had asked me before my mum died what was so special about SGPT or 1-2-1 coaching, my answer would have been entirely different. For me, they represent this idea that struggle, both on and off the gym floor, is something that can and should be shared by more than one person. We’re stronger as a community.

The gym isn’t just a place I work out, but it’s been my lifeline during one of the hardest points in my life and training in a small group has given me a sense of belonging for the first time since I lost my family.