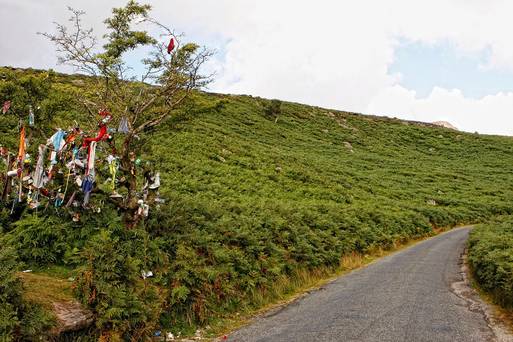 You just can’t beat a good magic road. There are a couple of them scattered around Ireland, but the closest one to where I live – and therefore the best – is at Mahon Falls in west Waterford.

It’s hard to describe a magic road on paper, as they are effectively a grand illusion created by the collision of human endeavour – in the form of a road – and a landscape that refuses to conform to our sense of perspective. Basically, you think you’re going downhill, but you’re going uphill. You stop the car, put down the handbrake and roll up a slope. It sound ludicrous, but you really need to experience one for yourself, as even for a profound cynic like me, they inspire the same reaction that Fr Dougal had when he was told about one by Fr Ted – “this is almost as mad as that thing you told me about the loaves and fishes”.

Last Easter, in a feeble effort to instill some wonder in my kids, I decided to bring them to the local magic road. On the way there, I regaled them with tales of how amazing it is, dressing it up with some ludicrous guff about soft places where the walls between worlds were pliable and faerie folk were able to pass through. This, I explained, was why the magic road was marked with a faerie tree, a wiry windswept bush adorned with a selection of rags.

When people say there is no magic left in the world, they might be right, as some nihilist prankster cut down the faerie tree that marked where the magic road is. And so it was that I went crawling through the six-kilometre route, becoming increasingly frustrated that I was unable to find the blasted road. Perhaps its magical power is invisibility, I japed, as my children repeatedly asked where the magic road – which I had clearly oversold – was. Attempting to summon it by swearing in front of my children didn’t work, nor did looping through the entire drive a second time. Adding to my frustrations was the fact that my gearbox was acting up. Completely bothered, I drove home. It was only when I got home and angrily googled where the damn road had gone that I realised that my car wasn’t acting up, it was in fact the magic road that I was on, and I was, accordingly, in the wrong gear. Of course, I should have known exactly where it was, as I had been there previously, albeit two decades before.

Back in 1996, I went to Mahon Falls with my mum, dad and sister. We did the magic road, marvelled at the beauty of the falls, and came home. It would be the last day all four of us would spend together. Two weeks later, my sister suffered a heart attack brought on by her epilepsy, and died aged 22. She had been sick for more than half her life, to the point where I can hardly remember what she was like before the illness came.

I never really understood what my parents went through until my own daughter was diagnosed with an incurable autoimmune condition, and I find myself living in the house I grew up in, sleeping in what was my parents’ room, with a sick daughter who sleeps in my sister’s room. It sometimes feels like I am repeating history, stuck on an endless loop until I gain a deeper understanding of what it was like for my parents to have a sick child. I think I am finally starting to understand, decades too late, how much they and my sister went through.

I brought my kids back to Mahon Falls in the summer, and this time we found the magic road. They were completely unimpressed. “What’s magic about it? It’s just a road,” they asked. Magic, I informed them, was being able to discern when you are facing what you might think was an uphill battle, but you were in fact travelling downhill in the wrong gear, simply because you lacked perspective. Magic was knowing when you have it good, and being able to enjoy it, because some day it may slip away from you. The magic, I solemnly intoned, was that we were there together, that we had each other.

It turned out that real magic is knowing that you are talking to yourself, as your kids have stopped listening to you, just as you didn’t listen to your own parents.