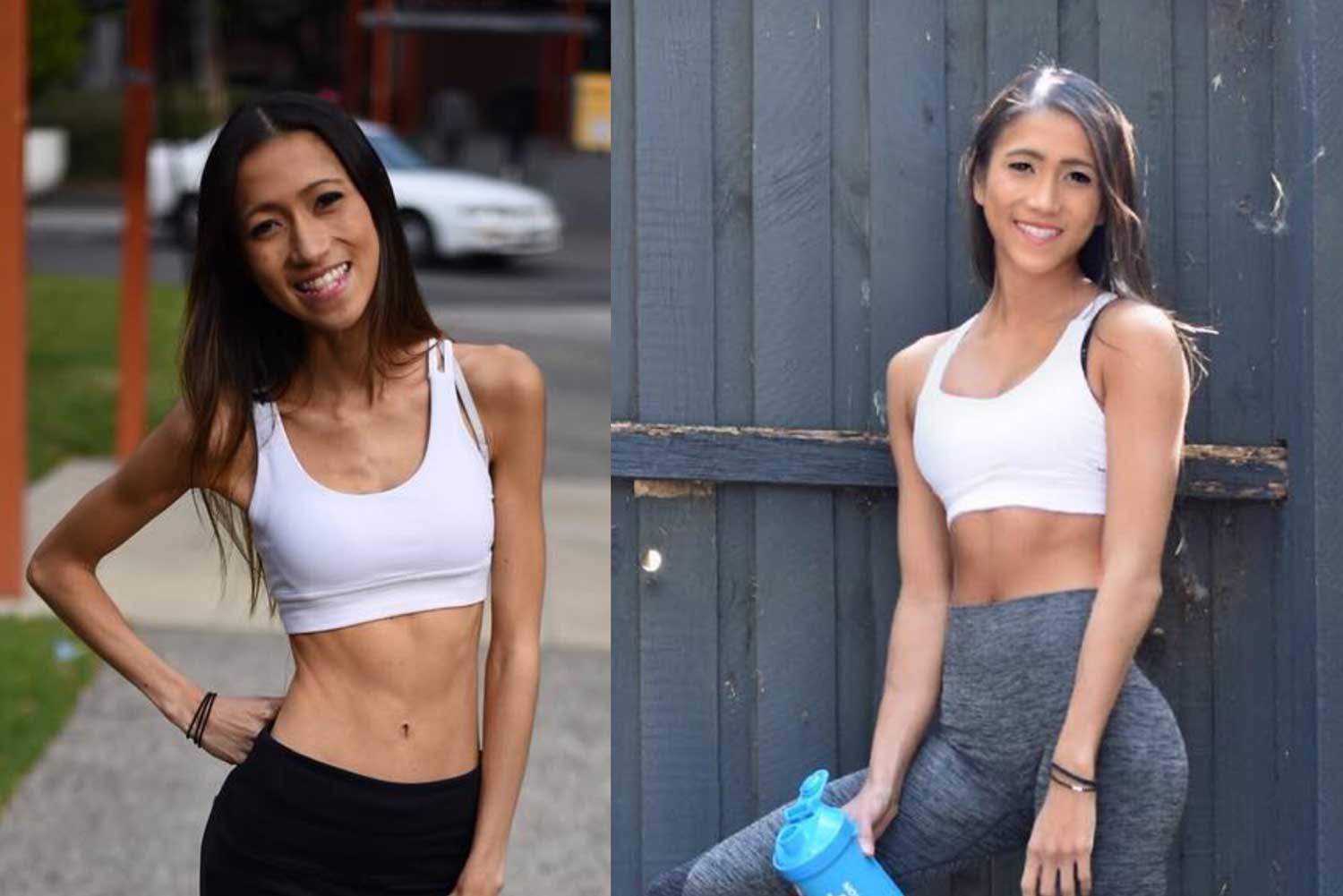 When fitness Instagrammer Sarah Rav, 20, was pulled aside by the dean of the hospital where she was studying, she never thought it might be because of her weight.

“Obviously I knew I was underweight but when I looked in the mirror, it didn’t click that I was unhealthily underweight. I’ve always been on the small side,” explains Sarah.

What happened next would change Sarah’s approach to health and fitness dramatically. Sarah explains that her medical supervisor took her aside:

“He said, ‘look, there’s been concerns about your health from your tutors, your fellow students, your friends and from your teachers. They’ve reached out to me, and they said they noticed that you look really unwell and that you’ve just been really down.”

The dean went on to advise that she take some time off from university and come back once she’d seen her GP and got a medical clearance.

Guess what? If I can do it, so can you ?? – I’ve never been exceptionally talented at anything. Never been genetically gifted. Never been incredibly intelligent or skilled. But you know I can do? I WORK MY A** OFF & I DONT STOP until I’ve reached my goal ?? That’s the one thing I have going for me, and it’s the only thing I’ve ever needed to achieve everything I’ve ever wanted. – So take it from me ?? If you do the same – if you persist, if you put your head down and work hard, if you stay hungry and determined, if you remain motivated, ANYTHING is possible ⭐️ . GO GET IT FAM ??

“Initially I thought that’s kind of weird but if that’s what I need to do, then I’d do it. I didn’t realise I had a problem at the time,” explains Sarah. “But when I saw my GP, she was pretty shocked. She weighed me (I weighed30kg at the time), and she said, ‘You need to go to the hospital tonight’.”

It was hearing the diagnosis of Orthorexia (an obsession with exercising) that made Sarah realise that she had to make some changes. Up until that point she had been running 15-20km a day, returning with her feet bleeding and exhausted, and had a ‘fear of food’ she felt were unhealthy.

After a week in hospital, however, where they monitored her because they were worried her heart might stop, she set about on a six-month program to bring her back to being a normal weight for her height and build.

“In my mind, after I was diagnosed, I was like ‘I am obviously doing things wrong. This is not the way that I should be thinking. This is unhealthy,’ ” explains Sarah.

“Given that I got into health and fitness to be healthy, it made a lot of sense that I had to fix myself.”

On the advice of experts, she stopped working out for three months and followed a pretty strict meal plan. “Something that was challenging but ultimately rewarding,” says Sarah.

“It was hard [on the meal plan] because I hadn’t had bread or carbs in three to four months maybe; I had to eat white rice with meatballs. And I was like ‘oh my God’,” remembers Sarah. “But then, at the same time, I knew that I needed to do it to get better.”

That was a year ago and now for Sarah, she’s more aware than ever how easy it is to become obsessed with being healthy and fit to the point that you become sick. Her approach to life now is all about balance.

Q&A TIME ?⁉️ Ask me anything you’d like below and I’ll do my very best to answer ?? Fee free to ask about any topic – my workout, my diet, my recovery etc. Nothing is off limits or too personal to share between friends ? Just make sure you introduce yourself so I can get to know you better!! ?❤️

“I don’t follow any sort of set diet anymore. No calorie counting. It’s literally ‘eat what I want to eat’. Eat when I’m hungry. If I want white bread over wholegrain bread, I’ll go for it. If I want pancakes, I’ll go for it. And then, with exercise, it’s just only for my enjoyment,” she explains.

It’s an approach she’s careful to share with her 1.7 million followers every day.

“Before all this happened, I was posting about fitness transformations and fitness info about ‘girls with abs’,” Sarah remembers. “But now I shy away from all of that and I post things that don’t focus on appearance so much as what your body can actually do, as well as other aspects [of health and fitness] that aren’t weight or appearance.”

The feedback from this shift and from Sarah’s health journey has been nothing but positive – something that she was worried about when she was first diagnosed.

“The secret to having it all is knowing you already do” ? – Not gonna lie. It’s been a tough couple of weeks. Kinda been feeling like I’ve been getting no where. Kinda been feeling like I’ve been stuck in a rut. Kinda been feeling like nothing I do makes a difference. ? – But you know what? I took a moment today to write down every single thing that I am grateful for & 2hrs later, I’m still going ? . Essentially I realised I have SO MUCH to be grateful for and even though things aren’t going my way right now, that doesn’t mean that I haven’t already achieved and have been given SO MUCH. ?? – So when things get tough, or you feel that life is treating you unfairly, take a little moment to think about just how much you actually have! ?? (friends, family, your health, enough clothes, enough food & water….) . I could go on and on, but hopefully this makes you lift your head a little higher and smile a little brighter ☺️???

“At first, I was really, really worried about coming out about it on Instagram because, in my mind I was like I can’t believe I have this [issue]. I didn’t want to tell anyone because I thought people are going to blame me for doing this to myself,” explains Sarah. “But once I came out, the reactions were so positive. Everyone has been so supportive and it just makes me realise that [struggling with] mental health isn’t as bad as what we perceive it to be. It’s definitely something that should be talked about more often, more openly.”

“My ultimate goal from this arduous journey is to help even just one single person with an eating disorder or mental illness – to make them understand that they are not alone, that they can get through this… and that they deserve recovery and happiness. If I can do that, then it makes everything I’ve been through worth it.”

If you are worried about yourself or someone in your care, the best thing you can do is talk to someone. Please contact the Butterfly Foundation 1800 33 4673 or chat online.