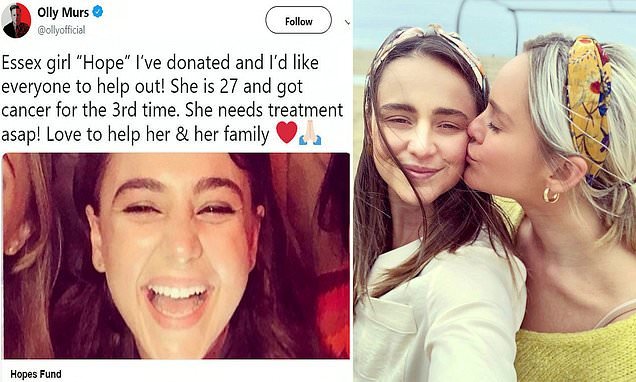 Cancer-stricken woman, 27, is told NHS chemotherapy ‘may not save her’ as family desperately try to raise £500,000 for experimental treatment in the US

A 27-year-old woman battling cancer for the third time is desperately trying to raise half a million pounds for experimental treatment in the US.

Hope Stringer has been told the NHS are unable to offer her a cure for her rare soft tissue sarcoma, which has spread to her lungs and lymph nodes.

She was told it had returned in December, just weeks after her boyfriend of seven years proposed to her, after spending two years in remission.

The bride-to-be, from Billericay in Essex, has received messages of support from celebrities including Olly Murs, Bradley Walsh and Danny Dyer. 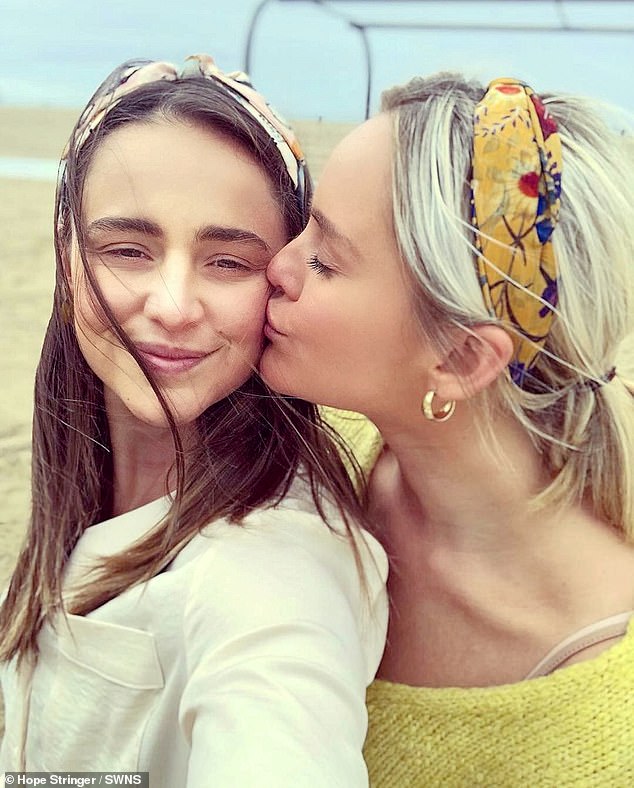 Hope Stringer (left), 27, is battling cancer for the third time. Her sister, Nancy Stringer (right), 29, set up a GoFundMe page to raise £50,000 for a experimental treatment in the US 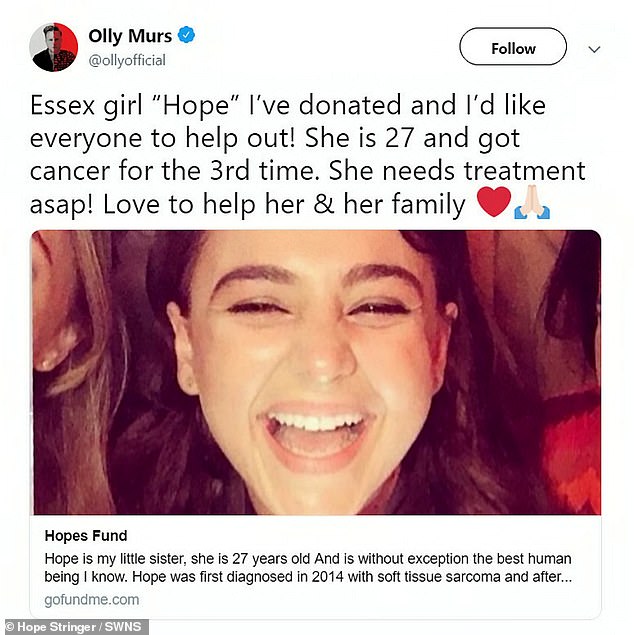 Celebrities, including Olly Murs, have shown their messages of support for Hope. Olly Murs, who has donated, tweeted that Hope needs treatment ASAP 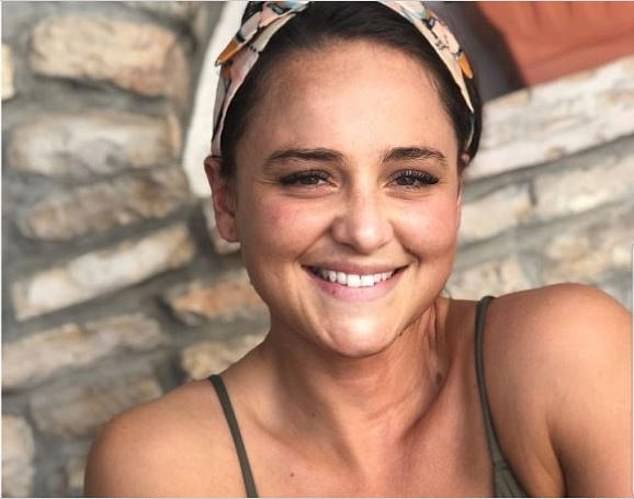 Hope’s sister, Nancy Stringer, 29, who set up the GoFundMe page, told MailOnline: ‘We will make this happen. Hope’s my best friend and she has been amazing throughout all of this.

‘We’re seeking a different treatment because the NHS are offering her the same chemo as last time.

‘It’s kind of a stab in dark to see whether that would work, and I think it would be more about managing the cancer than curing it.’

Writing on the fundraiser page, Nancy described her sister as ‘the best human being I know’ adding that Hope is ‘the most incredibly strong person you’ll ever meet’.

Hope is facing a serious cancer diagnosis for the third time after first being diagnosed with soft tissue sarcoma on her skull in 2014, then being told it had returned shortly after her treatment.

Just weeks after her boyfriend of seven years, Sean Pearce, proposed to her, doctors discovered Hope’s cancer had spread to her lungs and lymph nodes

Hope went through surgery, six rounds of chemotherapy and 30 rounds of radiotherapy to destroy her cancer which was diagnosed in 2014

The gym enthusiast first blamed her tiredness and blurred vision on long days at work and a night out with friends before being visiting her GP and discovering it was cancer.

But the NHS says it is often not possible to cure the illness once it has spread to other parts of the body.

Before going into remission in 2016, Hope went through surgery, six rounds of chemotherapy and 30 rounds of radiotherapy to destroy her cancer.

She had to be treated twice because the cancer returned almost straight away after her first round of therapy.

‘It was heartbreaking to watch,’ Nancy said. ‘I would have done anything to take it away from her and to have had it myself.’

Hope was treated by the NHS but doctors have told her that chemotherapy is now her only option as the tumour is inoperable.

The family have found a ray of hope in a drug produced in the US, called Rexin-G, a pioneering therapy which works by seeking out the cancer cells and targeting the genes which cause tumours to grow.

The treatment trial, which could start as early as April, specialises in Hope’s type of cancer. 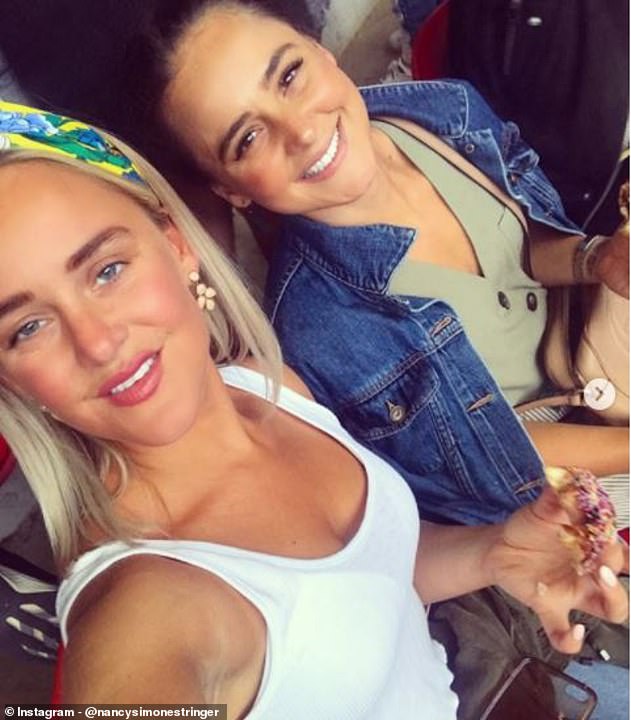 Hope’s sister, Nancy (pictured left), said NHS doctors are giving her sister the same chemotherapy she had during her last illness but she fears it will not be enough to give her sister her life back 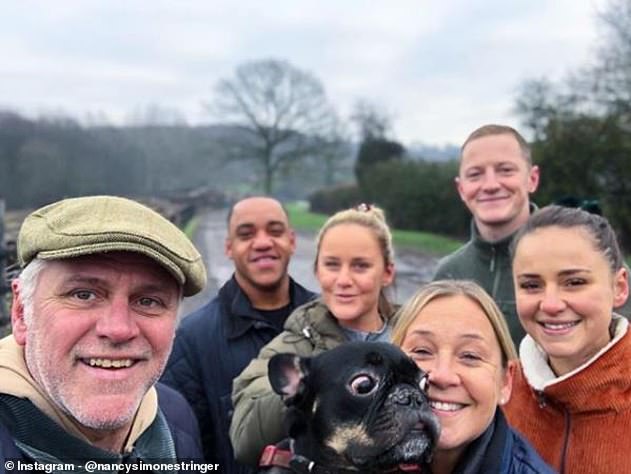 Hope and Nancy, pictured with their partners and parents, hope the cancer could be treated in California with an experimental drug called Rexin-G 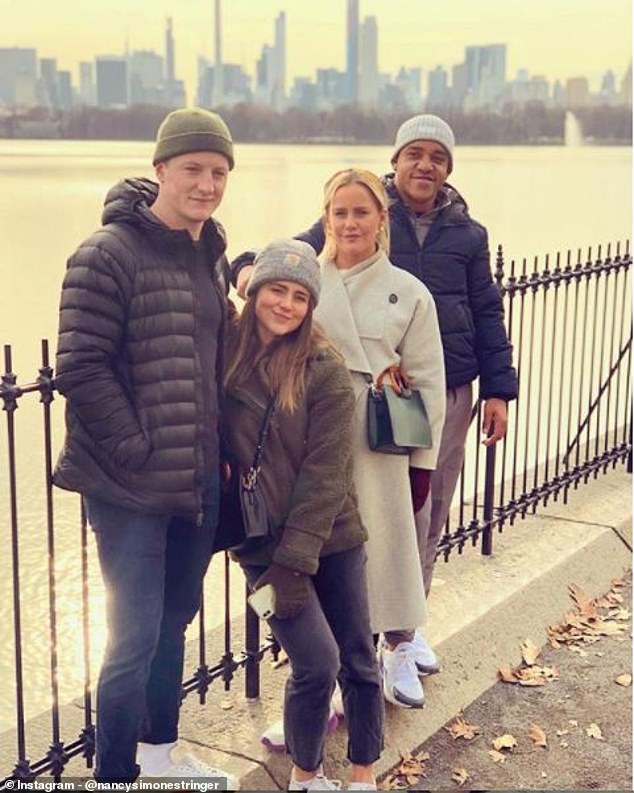 Nancy (pictured with her sister and their partners in New York) said: ‘I can sense she’s a bit scared but Hope is really positive. This couldn’t have happened to a stronger person’

‘I can sense she’s a bit scared but Hope is really positive,’ Nancy said. ‘This couldn’t have happened to a stronger person.’

The drug had been discontinued in the US but Hope’s campaign has reopened the trial.

Nancy said the family must pay for the production costs of the medication, which would take around four months.

Hope, who has had to put her wedding to fiancé, Sean Pearce, on hold, said: ‘We are funding the trial for six other people as well because it was the only way we could do it.

‘We are like a little family now and they are contributing to the treatment too.’

Hope and Mr Pearce will be moving to Santa Monica, California, for the duration of her treatment – which is believed to take around one year.

‘I just want to get started as soon as possible – the sooner the better.

‘Me and my fiancé will move out permanently and then my family and my sister will fly out when they can with their work.’ 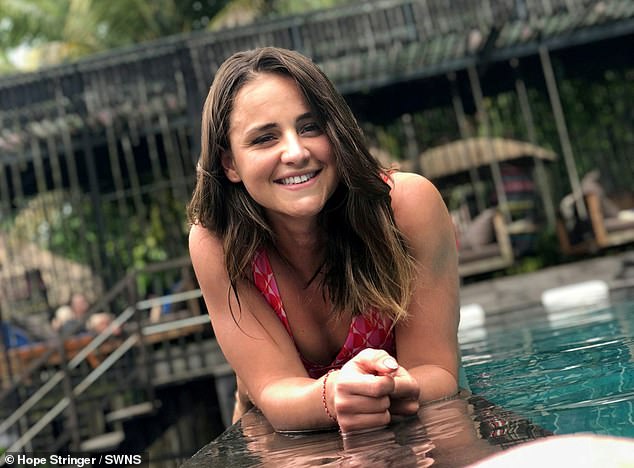 Hope first blamed her tiredness and blurred vision on long days at work and a night out with friends, but they were in fact her symptoms of cancer

Soft tissue sarcomas are rare cancers which develop in parts of the body outside of the organs and bones, such as blood vessels, fat, muscles and ligaments.

They often don’t have symptoms but can appear as soft, painless lumps, cause pain if the tumour is near the stomach, or breathlessness if it is near the lungs.

Sarcoma is an uncommon cancer and affects any part of the body, including the muscles and bones.

Around 15 people a day and 5,300 people a year are diagnosed with sarcoma in the UK.

Hope’s campaign has now raised almost £152,000 and has received donations from more than 3,000 people.

The charity’s chief executive Richard Davidson said he ‘can’t thank them enough’ and wishes Hope all the best with her treatment.

WHAT IS SOFT TISSUE SARCOMA?

A soft tissue sarcoma is a type of rare cancer which affects tissues outside of the organs and bones, such as blood vessels, fat, muscles, tendons and ligaments.

They can develop almost anywhere in the body and often have no symptoms until a lump is noticeable.

If the lump is near the stomach it can cause pain or if near the lungs it can make it difficult to breathe.

It is not known exactly what causes soft tissue sarcomas but they are more common among older people, people who have had radiotherapy, and those exposed to certain chemicals including herbicides.

The main treatments are surgery, radiotherapy and chemotherapy.

If the cancer can all be removed with surgery there is a good chance of recovery, but if the cancer has already spread to other parts of the body a cure usually isn’t possible – treatment in this case would be based on controlling the cancer’s spread and reducing symptoms.

You should see your GP if you have a worrying lump – particularly one that’s getting bigger over time or is the size of a golf ball or larger – or any other troublesome symptoms.