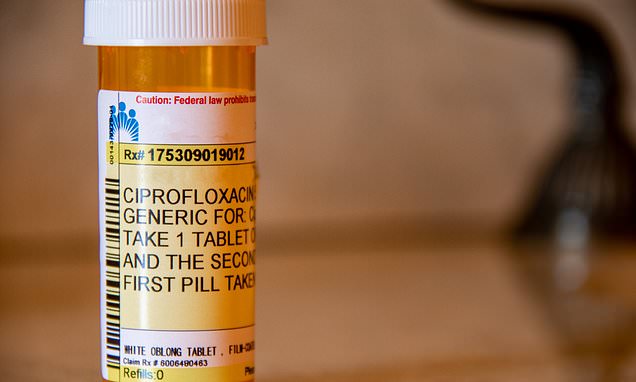 Taking a commonly prescribed class of antibiotics may DOUBLE your chances of getting a ‘leaky valve’ which leads to heart failure, study claims

Taking a common class of antibiotics may more than double your chances of getting a serious heart condition, a study suggests.

Researchers found patients using fluoroquinolones had a greater risk of developing aortic and mitral regurgitation, which can lead to heart failure.

The drugs are commonly used to treat everything from chest infections to urinary tract bugs. 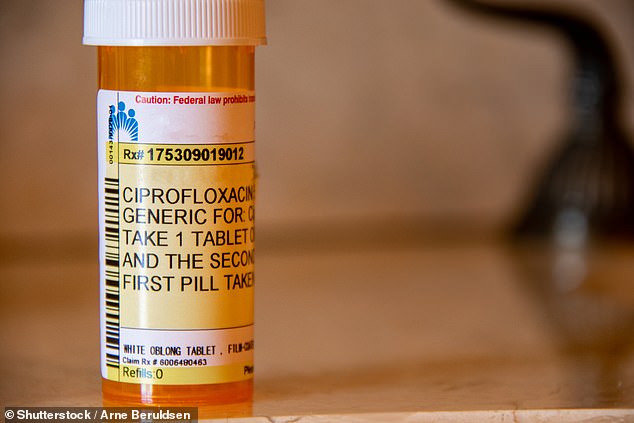 Taking fluoroquinolone antibiotics more than doubles your chance of a potentially deadly heart condition, a study suggests. Ciprofloxacin (pictured) is the most prescribed of these

Ciprofloxacin is the most prescribed of these, but other types include levofloxacin, moxifloxacin and norfloxacin.

Researchers at the University of British Columbia (UBC) looked at 125,020 patients who’d taken antibiotics in the last year.

Some had been prescribed fluoroquinolones while others had taken amoxicillin or azithromycin – other types of antibiotics.

The research team discovered 12,505 cases of a leaky valve, which can affect how blood flows around the body.

They found current fluoroquinolone users were 2.4 times more likely to develop the condition than those on amoxicillin.

Meanwhile, patients on fluoroquinolone were at a 1.8 times greater risk than those using azithromycin.

WHAT IS A LEAKY MITRAL VALVE?

The mitral valve is a small flap in the heart that stops blood flowing the wrong way. If damaged, it can affect how blood flows around the body.

A ‘leaky’ mitral valve is the nickname for a condition called mitral regurgitation, when it doesn’t close tightly enough and blood goes the wrong way.

This puts a strain on the heart and often causes symptoms such as breathlessness and fatigue, Harvard Medical School states.

In the long-run, mitral regurgitation can lead to serious complications such as atrial fibrillation (an irregular heartbeat) and heart failure.

It is often caused by mitral valve prolapse, when the flaps – called leaflets – bulge back into the left atrium as the heart contracts.

However, a leaky mitral valve also can happen with age, through general ‘wear and tear’ of the valve, the NHS says.

Other causes include cardiomyopathy (stiff heart chamber muscles), an infection of the inner lining of the heart, or congenital heart disease.

Those who had come off fluoroquinolone within the last 60 days were 1.5 times more likely to develop a leaky valve compared with amoxicillin users.

Lead author Dr Mahyar Etminan suggested that fluoroquinolones were being over-prescribed due to convenience.

The associate professor of ophthalmology and visual sciences at UBC said: ‘You can send patients home with a once-a-day pill.

‘This class of antibiotics is very convenient, but for the majority of cases, especially community-related infections, they’re not really needed.

‘The inappropriate prescribing may cause both antibiotic resistance as well as serious heart problems.’

The researchers hope their study helps inform the public and physicians that if patients present with cardiac issues, where no other cause has been discovered, fluoroquinolone antibiotics could potentially be a cause.

The findings were published in the Journal of the American College of Cardiology.

Figures suggest more than 675,000 fluoroquinolones were dispensed by GPs and other practitioners in England alone, and about the same amount again in hospitals.

But there have been claims the drugs – considered to be safe – can have side effects, such as tendon rupture, joint problems and nerve pain.

It’s thought that because fluoroquinolones act on the mitochondria – powerhouses in cells responsible for releasing energy – effects can be felt all over the body, sometimes permanently.