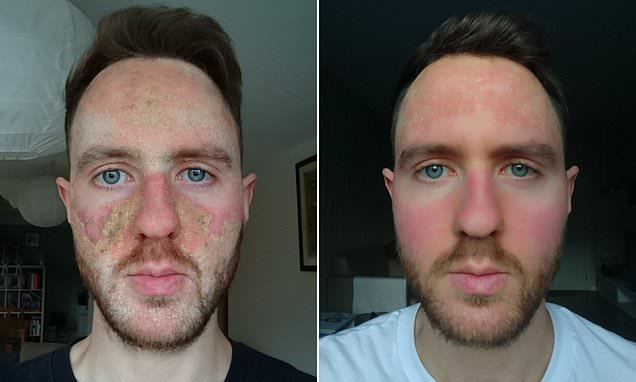 Designer, 27, cruelly called a ‘ZOMBIE’ after steroid creams for his acne made his skin WORSE is finally in recovery after overcoming his ‘six-year addiction’ to the ointments

A man claims he developed severe rosacea after doctors prescribed him steroid creams to treat his acne.

Matt Hess, 27, from Surrey, was prescribed steroids at 21 – eight years after he first started suffering from spots at just 13.

Although they initially provided some relief, Mr Hess claims his skin came back worse than ever when he developed topical steroid addiction.

While withdrawing from the treatment, Mr Hess was left with red, thick skin, which would cause cruel strangers to stare, with one even calling him a ‘zombie’.

After deciding to ditch the steroids in favour of a plant-based diet 18 months ago, Mr Hess’ skin is almost back to normal – six years after it took a turn for the worse.

He even quit his job as a designer this year and moved to Thailand, where he believes the warm weather and stress-free lifestyle is aiding his recovery. 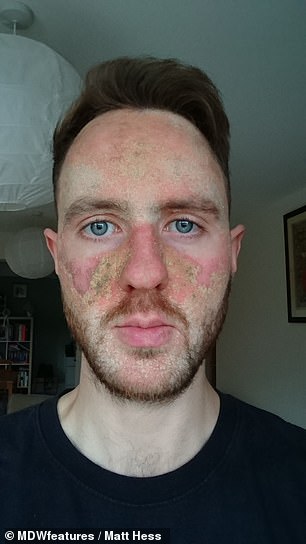 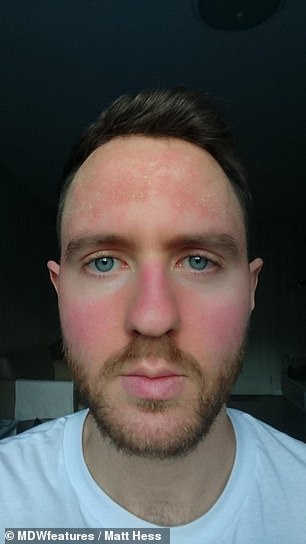 Matt Hess developed severe rosacea (left) after doctors prescribed him steroid creams to treat his acne. Eighteen months after ditching the creams, his skin is nearly back to normal (right)

After developing spots in his early teens, Mr Hess initially tried ‘anti-acne’ face washes before finally being prescribed antibiotics at 15.

‘The problem is, while antibiotics kill the infections, they also kill the good bacteria, which are critical for overall health,’ he said.

Mr Hess believes the antibiotics ‘knocked out’ his immune system, which caused him to develop sinus problems, fatigue, poor digestion and food intolerances.

It was not until Mr Hess turned 21 that he tried steroid creams, which left with him debilitating burning, itchy skin that made him ‘socially anxious’.

‘They suppress your immune system, so your body’s defences are weakened and your toxic load builds up,’ he said.

‘When I was going through the withdrawal, a man on the train told me I looked like a zombie and told me to get off the train. People also used to stare at me in public a lot.

‘I went to the doctor a few times and it made everything more confusing whenever I did. Each time I would get a different diagnosis – rosacea, eczema or seborrheic dermatitis.’

As well as believing he was treated inappropriately, Mr Hess, who is training to be nutritionist, also blames his hectic lifestyle for his skin problems.

‘I washed my face with abrasive products and applied harsh lotions every day to try to combat the symptoms, which damaged the skin barrier quite a bit,’ he said.

‘My diet was dreadful as I’d eat ready meals, processed foods, energy drinks and no fruit or vegetables.

‘I didn’t drink much water, did little exercise and was constantly stressed. It was all these aspects of life coming together to create a recipe for disaster.’ 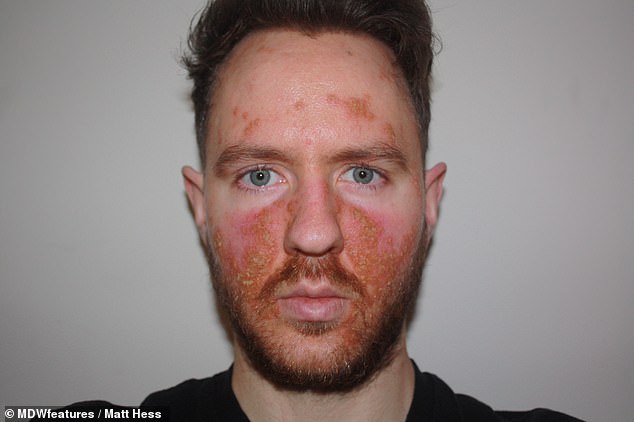 Mr Hess suffered from topical steroid addiction, which caused the skin on his face to thicken, turn red and develop dry patches. Although the creams initially helped to ease his acne, his skin then became worse than ever, which caused Mr Hess to develop social anxiety 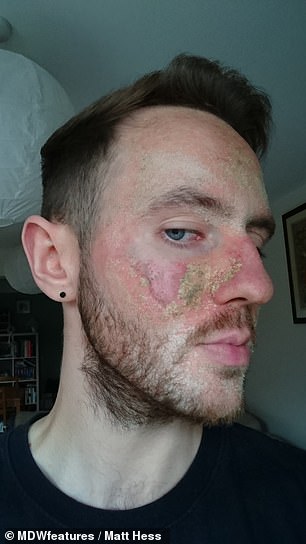 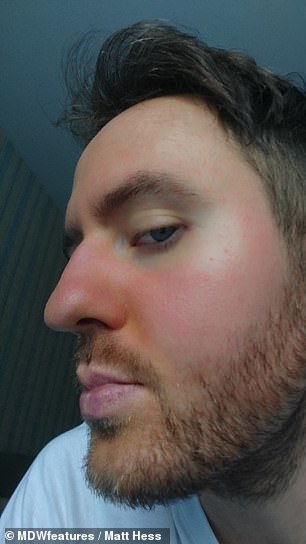 While battling steroid withdrawal (seen left), Mr Hess claims cruel strangers would stare at him, with one even calling him a zombie. With his skin nearly clear (right), he is more confident 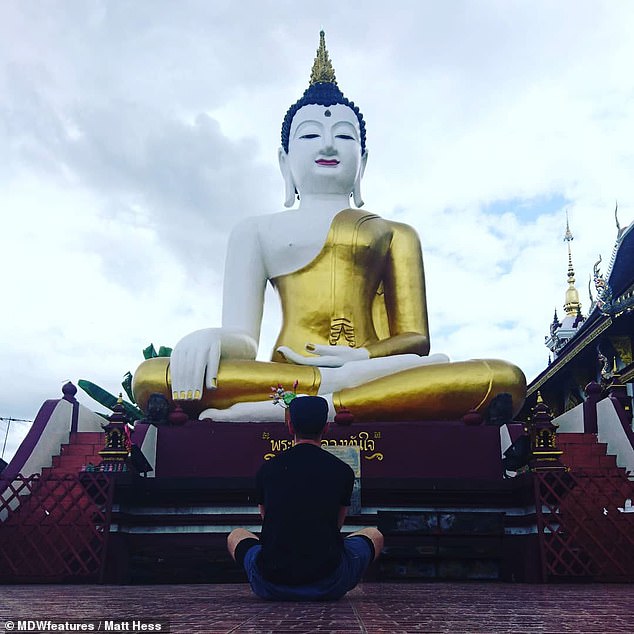 WHAT IS TOPICAL STEROID ADDICTION?

Topical steroid addiction arises from the use of such creams to treat conditions like eczema.

First described in 1979 in the International Journal of Dermatology, the theory is, over time, the skin becomes ‘addicted’ to the steroids. But it is not widely accepted among the medical community.

It occurs when steroids have been discontinued after a prolonged or inappropriate length of administration.

Topical steroid addiction has not been reported with correct drug use.

Excessive sweating and itching is a sign of recovery.

Doctors should advise patients to avoid long term or high dose steroid use.

Since ditching the steroids and antibiotics for good, Mr Hess’ skin only really began to improve when he moved to Thailand six months ago.

‘I would say this was mainly down to the amount of time I’ve allowed my body to heal and rid itself of all the steroid residue, as well as being consistent with diet, exercise, stress management and avoiding toxic things,’ he said.

‘On top of a plant-based diet, I do a number of other things including exercising daily to promote cardiovascular health, sweating and detoxification.

‘I drink lots of clean water, about two-to-three litres a day, and I also just try to think positively and appreciate life as much as possible.

‘I’m still not 100 per cent healed but I’m really getting there, and my mental health is better than it’s ever been. I can interact with people confidently without worrying about how I look.’

Mr Hess is speaking out to raise awareness of topical steroid addiction, and encourages patients to bite the bullet and go through the dreaded withdrawal stage.

‘It will be one of the most challenging things you ever have to go through, but you will come out of the other side stronger, wiser and healthier,’ he said.

‘The amount of times I was sat in the doctor’s office with a burning red face and I was told there was no cure and I’d need prescriptions for the rest of my life.

‘It lit the fire beneath me to take back control of my life, so I hope others can do the same.’ 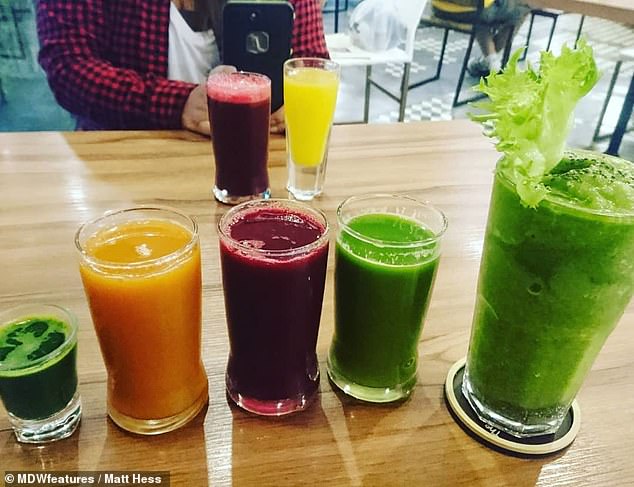 After existing on a ‘dreadful’ diet of ‘ready meals, processed foods, energy drinks and no fruit or vegetables’, Mr Hess has adopted a plant-based lifestyle and is training to be a nutritionist