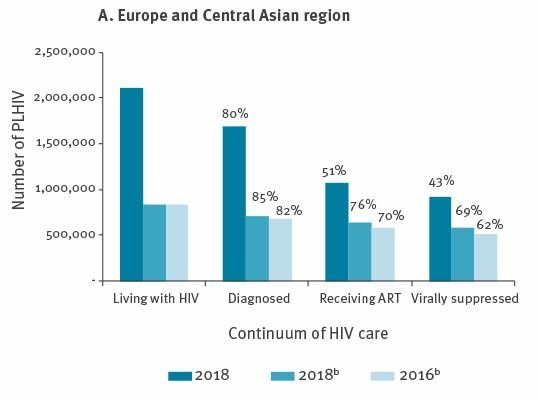 From diagnosis of HIV to successful viral suppression: in a rapid communication published in Eurosurveillance today, ECDC and co-authors from Public Health England and The National AIDS Trust summarise the progress towards HIV elimination in 52 countries in Europe and Central Asia. The main issues: diagnosing those who are unaware of their HIV infection and treating them.

The global targets set out by UNAIDS for 2020 are to diagnose 90% of all HIV-positive people, provide antiretroviral therapy for 90% of those diagnosed, and achieve viral suppression for 90% of those treated (known as 90-90-90 targets). In 2018, 52 of 55 countries completed the survey indicating the progress towards these targets in Europe and Central Asia.

Between “substantial progress” and “concerning”

Is Europe on track to end AIDS by 2020? Following analysis of the data provided by the 52 countries in 2018, the progress towards the 90-90-90 targets stands at 86%-91%-92% in the EU/EEA. This means that overall, countries in the EU/EEA are on track to reach the targets by 2020. Looking at the whole Region, however, a striking drop in the second stage of the continuum is apparent: across Europe and Central Asia, the figures show a significant gap in the amount of people who are diagnosed with HIV but not receiving treatment: 80%-64%-86%. The article provides results on the targets for each of the reporting countries.

The authors acknowledge “substantial progress” towards the 90-90-90 targets across Europe and Central Asia. However, among the estimated 2.1 million people living with HIV in Europe and Central Asia “only two out of five are estimated to be virally suppressed in 2018”. Furthermore, “the substantial drop-off between the percentages diagnosed and treated in the East sub-region is concerning since it enables preventable deaths, serious illness and onward transmission.”

The results give new insights into necessary steps in the regional or national HIV responses. As almost two-thirds of the 1.2 million people across the region with transmissible virus are diagnosed but only half of those are on treatment, “the biggest public health impact could be achieved through rapid and sustained scale up of treatment”, according to the authors. This is particularly true for countries in the east of the region where the outcome was 76%-46%-78%.

Policies that diversify and enhance the offer of HIV tests could help address the problem of late diagnosis across Europe, as outlined in the new ECDC guidance on HIV, hepatitis B and C testing. This would include testing for indicator conditions, during screenings for other sexually transmitted infections, in community-based settings, as self/home-testing and for partner notification.

The authors highlight that the 90-90-90 targets remain a “powerful tool to assess progress towards HIV elimination and drive standards in care” for people living with HIV. But these targets do not provide a comprehensive picture of the public health response to HIV. “Each ‘last 10 percent’ includes people especially marginalised from healthcare services.”

The so-called continuum of HIV care is a framework which allows countries to monitor the effectiveness of key areas in the response to the HIV epidemic along several stages, from diagnosis towards viral suppression. The overall aim is to that people living with HIV are diagnosed (early) and receive antiretroviral treatment (ART) which leads to viral suppression, i.e. the virus is no longer detectable in the blood. Such an undetectable viral load also means that HIV positive people on effective treatment do not transmit the virus.