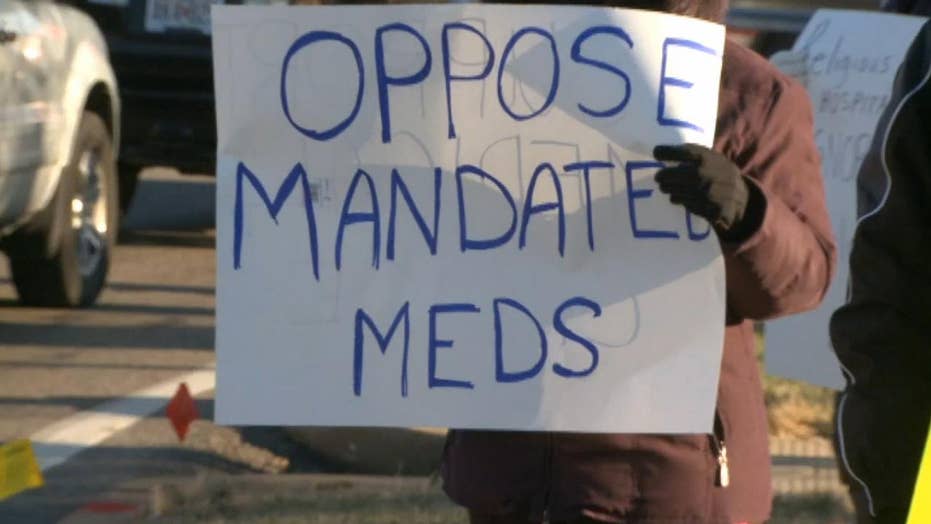 Group of protesters demonstrate outside Mercy Hospital South in St. Louis over the hospital’s policy that requires employees to receive a flu shot, claiming at least one nurse was fired after she refused to be vaccinated over religious reasons.

A group of protesters gathered outside of Mercy Hospital South in St. Louis Monday to protest the hospital’s policy that requires employees to receive a flu shot, claiming at least one nurse at the facility was fired after she refused to be vaccinated, citing religious reasons.

Nelia Aubuchon, who organized the protest, told Fox 2 a nurse at Mercy Hospital South was terminated after she requested an exemption from the policy on religious grounds. The hospital allegedly refused to grant the nurse’s request and terminated her shortly after, Aubuchon told the news station.

SHOULD YOU GET THE FLU SHOT? WHAT TO KNOW ABOUT THE 2018-19 FLU SEASON

"Mercy has a policy that says that they accept religious and medical exemptions and yet, in practice, it appears that they are not accepting them; they're denying them,” Aubuchon told the news station, though she wouldn't identify the nurse who was allegedly fired.

"Here at Mercy South, this nurse knows of no other doctor or nurse who actually was granted their religious or medical exemption and, frankly, here we're focused on the religious exemption because this nurse chose rather than being coerced in receiving the shot,” she added.

Aubuchon wrote on Facebook the protest was not about the “efficacy of flu shots [or] mists or a pro or anti-vaccines conversation.” Rather, she explained, “It's about Mercy's denial of ALL religious and medical exemptions for their employees and their draconian measure of terminating those who will not give in to their policy. Mercy Hospital denied ALL doctor and religious leader signed exemption paperwork.”

But Bethany Pope, a spokesperson for Mercy Hospital South, told Fox News the hospital approved “the majority” of the 170 exemption requests it received this year — many of which were “accepted for meeting valid medical or religious exemption criteria.”

In total, the Mercy Health System employs more than 44,000 people, according to Pope.

“The point of our flu vaccination policy is simple: protection against the flu virus saves lives, especially those of our most vulnerable patients. Requiring health care co-workers to be vaccinated for the flu is a best practice across the U.S. to ensure the safety of patients, co-workers and community members. Mercy revised our flu vaccination policy several years ago and requires compliance with the policy by all Mercy co-workers as a condition of employment,” Pope said.

“Those co-workers whose exemption requests were not accepted will be notified this week and, in accordance with our policy, will not be permitted to remain employed without receiving a vaccination. This is an important step in protecting our patients, visitors and co-workers,” she added, noting the hospital's policy regarding a mandatory flu shot is the same “as most hospitals across the country.”