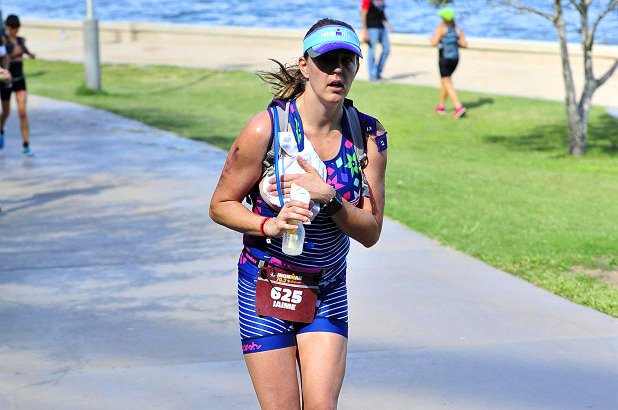 Mom life never stops — even on the way to a personal record.

Air Force Staff Sergeant and mom of two Jaime Sloan was racing in her first Ironman 70.3 since giving birth to her 7-month-old son, when she realized she had to pump her breast milk. Sloan had planned ahead and expected to stop in between the bike ride and the run to sit and pump, until she saw she had a shot at a personal best.

“I knew that I would PR (hit a personal record) because I had a really amazing bike ride and a pretty decent swim,” she tells PEOPLE. “I had brought my hand pump and I just decided to go for it. I was making good time and I just didn’t want to stop and lose the time on my race.”

Armed with her hand pump, a CamelBak and a washcloth, the 34-year-old took off for the run and figured out how to pump as discreetly as possible.

“At first it was a struggle because I was trying to get the milk flowing,” she says. “It takes a little bit of work with the hand pump, and my legs were very tired. But once I got it going I was able to run, even though I was going really slowly.”

Still, Sloan managed to clear out the buildup in both of her breasts, pop the bottle in her CamelBak and keep on running the 13.1 miles — with all her equipment.

“Ironman races actually have a policy where you can’t take anything or hand anything to a spectator, so I had to run all the way through with the milk,” she says.

And Sloan made it through the rest of the Ironman 70.3 Arizona and on to a surprising personal record of six hours and 12 minutes, which she credits to her cheering squad.

“It was pretty incredible,” she says. “To be honest I wasn’t even sure that I would do that well. I was even concerned that I wouldn’t even finish. I hurt my shoulder about two weeks before the race, and I took two weeks off from swimming. But I came out strong and I guess I just took the triathlon one section at a time. Knowing that I was able to overcome all that and do so well in the race and get a PR was pretty awesome for me. But I definitely owe it to my family, because I saw them about four times during the run and they just kept energizing me and encouraging me.”

Sloan says it capped off a stressful training cycle as she learned how to manage life with a newborn and her 2-year-old daughter, along with going back to work and a parenting on her own for a period of five weeks when her husband was traveling.

“It was difficult, for sure,” she says. “I lost a lot of sleep. But I would just take the kids to daycare and run in the mornings or ride my bike. I just found a way to work it in.”

And Sloan says she thinks her experience shows that people can do whatever they put their minds to.

“Anything is possible,” she says. “I think it’s so cool that there are other people out there who seen this and who have been encouraged to not only do triathlons, but to continue they’re breastfeeding journey or whatever journey they’re on.”