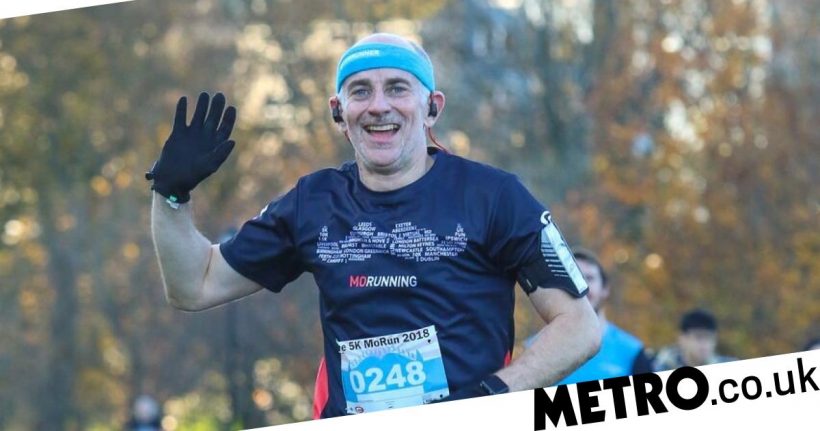 James Martin has struggled with mental illness for large parts of his life, and now he wants to take his own experiences and turn them into something more positive.

James will be running 84km every week to represent the 84 British men who take their lives each week. That’s 12km every day – and the aim is to get people talking and raise vital funds.

Last year, James ran 6km a day for Movember to start vital conversations about men’s health – especially mental health, and he was shocked by how much impact that had. Now he wants to take it a step further.

‘On these runs, I got talking to people and was amazed about how much more people (especially men) were able to open up when we were shoulder to shoulder rather than face to face.

‘I spoke to more than 75 people last year and I wanted to do it again. I had found a way to connect with people on this topic and I wanted to use the opportunity while I could.

‘Men are very bad at opening up and I wanted to raise awareness that there are ways to help them do this; be in situations where they are more comfortable, such as exercise, and by “reaching in” and asking them the right questions.’

James says that he almost became a statistic when he was at his lowest in 2010. He considered taking his own life. So he know exactly how hopeless things can feel, and why support and resources are so crucial.

‘I have been there and I know how hard it is and the pain that goes along with it,’ says James. ‘In my darkest hour, tortured by my feelings of worthlessness, inadequacy and loneliness I did not think that I could talk to anyone, including my wife and family because I “knew” that it would be proof that I was not a man and that I was just a weak, good for nothing, less-than-human.

‘I had worked out my suicide plan and it was only through good fortune and the intervention of my wife, family and a brilliant GP, that I am still here today.

‘I am now in the very fortunate position of being able to tell my story to raise awareness and hopefully persuade those in a similar situation to ask for help as well as friends to check in on their mates if they think something is wrong.’

Last year saw a 13% increase in male suicide and there is still a significant stigma attached to mental ill-health.

Suicide is the biggest killer of men under the age of 45, and under-funding for mental health services leaves those with illnesses facing huge waiting times.

‘This has to change and we need to get parity between physical and mental health, says James. ‘We have no problem saying that we are going to see a physiotherapist if we have injured a muscle, but how many of us would freely admit to seeing a psychotherapist when we have a problem in our brain?

James thinks the tiredness and physical exhaustion is going to be the hardest part of his challenge, but he knows the mental side will be tough too.

‘Last year, with 6km a day, was hard but this is double the distance every day. I started running two years ago and now run around four times a week, so it is going to be a big step up.

‘I am training, so I feel good at this stage. However, I know it is going to be tough.

‘The mental side is also going to be hard. Most of the runs are going to be at work or at home, and there are only a small amount of routes to take so it may be a little monotonous at times.

‘Added to that is the fact that I am not a social runner, as I use running as my headspace and mindfulness. It gives me peace and a time where I can escape my ever chattering brain.

‘During the challenge, I am going to be running with people and talking with them. It is a challenge for me.

‘The good thing though is that I will be talking to people about a subject that is important and that in itself will give me solace. It may be that one of those conversations will help someone realise that it is OK and good to talk.’

James is hoping that his epic month of running will raise awareness about male mental health and help people feel empowered to get the help they need.

‘I want to stop anyone feeling as I did for much of my life; unable to talk because they do not believe anyone is interested or wants to help,’ explains James.

James even has some practical advice for people if they’re worried about a man in their life.

‘If you know someone is acting differently or suspect that something is not right, don’t shy away but put an arm around the shoulder and say: ‘I am here for you”.

‘Get the men in your life talking. My target this Movember is to talk to 150 different people, and I hope this will inspire so many other conversations.’

James is raising money and looking for sponsorship to help him hit his target of £10,000 for the month.