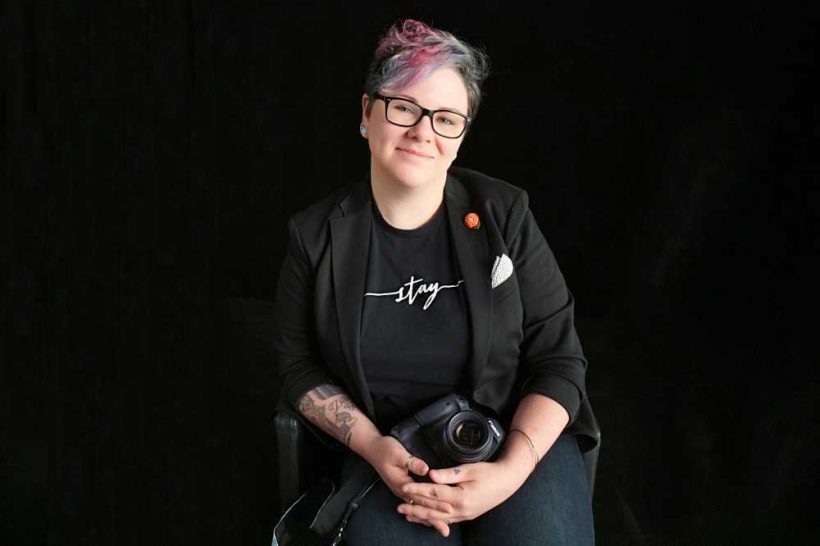 At 23 years old, Dese’Rae L. Stage tried to kill herself.

At 15, she had been devastated by the loss of a “really funny, whip-smart” classmate who died by suicide, and his death shaped her ambition to help others. But even this experience did not prevent her own suicide attempt, nor erase early fears of how others might perceive her struggles with depression.

“I was afraid something bad would happen if I told,” she tells PEOPLE. “I thought that if I told my parents, they would be disappointed in me.”

In 2010, the Philadelphia photographer and writer, now 36, turned those fears on their head, launching an online archive of portraits and interviews where suicide attempt survivors like her could tell their stories.

LiveThroughThis.org now includes nearly 200 survivors from all walks of life — and many of them share their experiences in this week’s issue of PEOPLE. The stories help mark the launch of Let’s Talk About It, a year-long initiative through which PEOPLE encourages open conversations about mental health through stories about ordinary people and celebrities who have dealt with mental illness.

Through Stage’s project, survivors are able to express themselves. Some say the darkness is behind them, others address efforts to stay on top of continuing struggles, but all express gratitude that their lives have gone on.

Shelby Rowe, 47, a suicide prevention program manager, says, “Because I work in the field, I had this false sense of safety. I didn’t pay attention to warning signs or ask for help. I thought, I teach coping skills!” But after surviving an attempt, she learned how to recognize “nobody else expected me to be as perfect as I thought I needed to be. I’m kinder to myself. I haven’t been at risk in a long time.”

David Pajo, 51, a musician, says, “Dese’Rae has a pin that says ‘Just Stay,’ and that resonates. If someone can just stick around, solutions can be found.”

Nancy Nettles, 53, a student advisor and music director for a theater group, survived multiple attempts before finding her way to community mental health care. Now, when the woman who advised her “is talking about someone who made a total turnaround in their life, she will talk about me,” she says. “That’s what really started me being vocal about the struggle I’ve gone through.”

Says Stage, a married mom of two: “Exposure helps change public attitudes.” (In the OKCupid profile that first connected Stage to her future wife, she boldly wrote, “If you can’t talk about suicide from an academic standpoint, don’t message me.”) “I’m trying to change the discrimination and the prejudice that people have against suicidal people by saying, ‘Look. It could be any of us.'”

She describes it as “coming out of the shame closet.”

“The idea was to get people to look us in the eyes and kind of empathize,” she says. “Putting faces and names to this issue, I think, was kind of a game changer.”

Stage, she says, has “been a phenomenal voice.”

If you or someone you know is considering suicide, please contact the National Suicide Prevention Lifeline at 1-800-273-TALK (8255), text “home” to the Crisis Text Line at 741-741 or go to suicidepreventionlifeline.org.