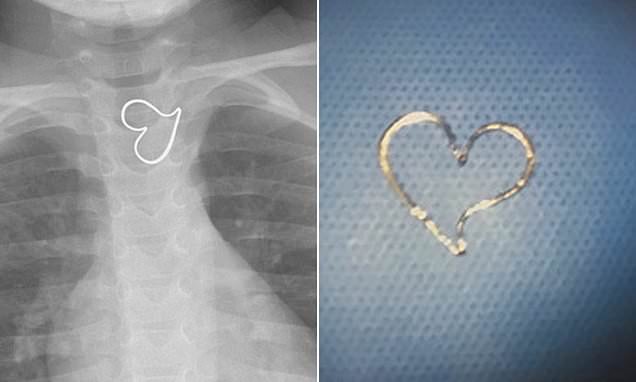 A heart-in-mouth moment: X-ray reveals a perfect heart shape in a girl’s chest after she swallowed a necklace

A three-year-old girl had a real heart-in-the-mouth moment when she swallowed a pendant in the shape of the organ, a surprising X-ray discovered.

The unidentified youngster, from San Diego, California, was taken to her local emergency department after she accidentally ingested the metal pendant.

An X-ray of her chest showed the item in the proximal thoracic oesophagus – the muscular tube which connects the throat to the stomach.

Incredibly, it had formed a perfect heart-shape in her chest cavity. 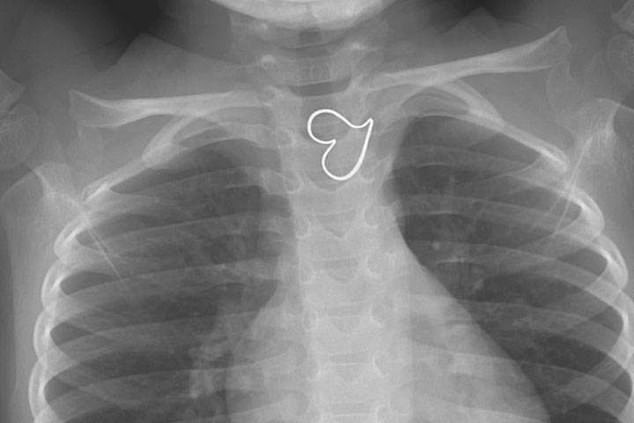 As reported in the New England Journal of Medicine, the patient was taken to the operating room to undergo rigid endoscopy.

There, the necklace was removed in full.

Further inspection of the esophagus showed minor injuries of the lining of the oesophagus, but nothing serious or requiring further treatment.

After the procedure, the patient recovered and was discharged home.

Typically, children aged one to three years old are most likely to swallow foreign objects.

While some pass naturally through the system, some require immediate extraction if they’ve been present for more than 24 hours. 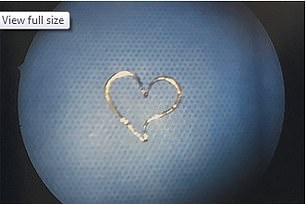 Extracted: The patient’s item was removed in full and can be seen here after its removal

These include sharp objects and button batteries.

The organisation urged parents to be aware of the batteries’ dangers and to store and dispose of them properly.

‘The consequences of swallowing a button battery can be truly devastating.’

The warning comes after health investigators studied the case of a child who died after swallowing one of the batteries.

HOW LONG DOES IT TAKE FOR A FOREIGN OBJECT TO PASS THROUGH THE BODY?

A group of Australian doctors each swallowed a piece of Lego as part of an odd experiment to work out how long it really takes for it to pass through the body.

As children are often rushed to hospital after swallowing small items, such as Lego, researchers from the University of Melbourne enlisted the help of six medical professionals and had them swallow the head of a Lego man.

The bizarre experiment, which the team branded ‘dedication to paediatrics’, was published in the Journal of Paediatric and Child Health.

Participants ingested a Lego head, after which it was a case of searching for the item in faeces, with the ‘search technique decided by the participant’.

The study found the small toy should be out within one to three days.

However, one patient never found the piece they swallowed in their faeces, searching for two weeks.

They added that although it is possible children’s digestion time would be different from an adult, there is no evidence to support this.