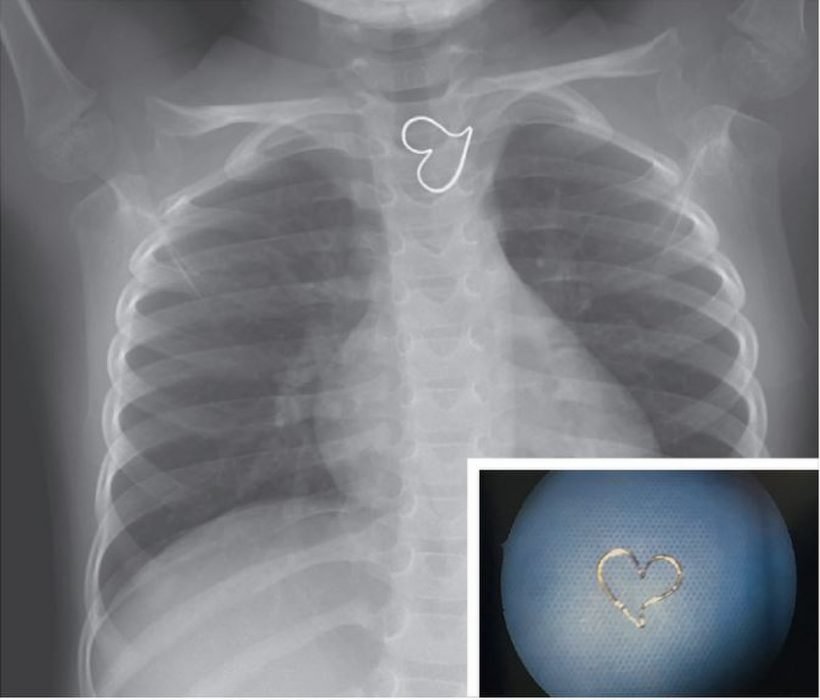 It looks like someone drew a heart over a child's X-ray. But this cartoonish heart — which seemingly floats in the child's throat — is real, the result of a heart-shaped pendant that got stuck in the girl's esophagus.

The X-ray was taken when a 3-year-old girl was brought to the emergency room after she ingested the gold-colored pendant, according to a new report of the case, published today (Feb. 13) in The New England Journal of Medicine and appropriately titled "Heart of Gold."

The image confirmed there was a "heart-shaped foreign body" in the child's esophagus, the report said. [11 Weird Things People Have Swallowed]

Toddlers, of course, put all sorts of things in their mouths and sometimes swallow them. Potentially dangerous items, such as sharp objects and button batteries (which could tear or burn the esophagus), require immediate removal if swallowed, the report authors wrote. In addition, objects that have been stuck for more than 24 hours warrant removal.

But if a child swallows an item that doesn't appear to pose an immediate danger, the patient is observed for a limited period to "allow the foreign body to pass spontaneously," the report said. That was the case for this patient, who experienced no symptoms from the pendant.

In several more X-rays taken later, however, the pendant didn't appear to be budging from its location. So, doctors performed a nonsurgical procedure to remove the object. The child recovered well after the procedure and was sent home, the report said.