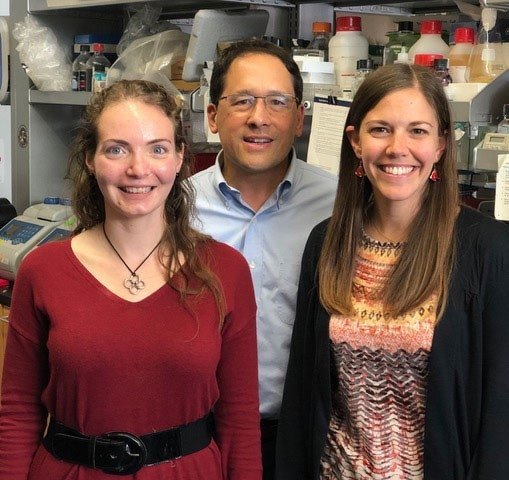 In trying to decipher the “DNA origami” responsible for the generation of transplantable human skin, Stanford researchers have uncovered a master regulatory hierarchy controlling tissue differentiation.

A developing embryo faces the difficult task of concocting myriad tissue types—including skin, bone and the specialized glop that makes up our internal organs and immune system—from essentially the same set of ingredients: immature, seemingly directionless stem cells. Although some of the important players that provide direction to this transformation are known, it’s not been clear exactly how they work together to accomplish this feat.

Now, researchers at the Stanford University School of Medicine have identified a key regulatory hierarchy in which proteins called morphogens control gene expression by directing the looping of DNA in a cell. This looping brings master regulators called transcription factors in contact with specific sets of genes necessary to make particular tissue types.

Varying concentrations and types of morphogens cause different looping events, directing different cell fates much in the same way that railroad workers control the direction and eventual destination of a train car by connecting different portions of track.

Although the researchers were particularly interested in learning more about how to stimulate the production of a type of skin cell called keratinocytes to treat epidermolysis bullosa, a blistering skin disease with few treatments, they believe their findings may have implications for the derivation of other therapeutically useful tissue types.

“For the first time, we were able to see how morphogens and master transcriptional regulators work together to make specific cell types,” said Anthony Oro, MD, Ph.D., professor of dermatology. “We’ve always wondered how a transcription factor required for the production of vastly different cell types knows which genes to make into proteins in which situation. Now we’ve answered that question: morphogens help the master transcription factors hook up to the right targets. Changing the concentration or type of morphogen, or even the order in which they are added to a cell, causes dramatically different outcomes.”

Morphogens are responsible for the body patterning that ensures, for example, that a fly’s wing ends up on its thorax rather than the top of its head. They were the first important class of proteins identified in the early days of developmental biology, in part because their effect on a developing embryo is so dramatic. Subsequent studies showed that they work through the process of diffusion and can have different effects based on their concentration throughout the embryo. Cells that are near other cells making and releasing the morphogen are exposed to a much higher concentration than those farther away; as waves of varying morphogens overlap and interact, they direct the proper placement of legs, wings and the head, for example.

Soon, researchers also identified other types of proteins called master transcriptional regulators that bind to DNA to control the expression of specific genes throughout the cell. But they quickly learned that each of these regulators could spark the formation of vastly different cell types, and it was unclear how each regulator knew to favor the development of one tissue type over another.

Oro and his colleagues were studying the effect of two well-known morphogens involved in skin development—BMP4 and retinoic acid—on the activity of a master transcriptional regulator called p63 that is responsible for tissue types as diverse as skin, thymus and the lining of the esophagus.

In particular, they were interested in the process by which human embryonic stem cells can be triggered to develop into keratinocytes to form sheets of skin to repair the blistering and open wounds seen in people with epidermolysis bullosa. Previous attempts, although somewhat successful, yielded impure populations of cells that are difficult to use therapeutically. In search of a more reliable way to produce the cells, they wondered if they could generate keratinocytes by exposing the stem cells to a defined combination of morphogens and transcription factors. To do so, however, they experimented with when, and how much, of each component to add and watched how the cells reacted.

The researchers found that, although p63 is required to make skin cells from embryonic stem cells, it is not sufficient. In the absence of BMP4 or retinoic acid, nothing happens, even if p63 is snuggly bound to its landing pad on the DNA. However, when BMP4 or retinoic acid is added, the DNA conformation changes, and p63 begins transcribing skin-specific genes. This dependence of p63 activity on the presence of morphogens was unexpected and telling.

“Basically, p63 binds to the DNA, and then sits back and waits, twiddling its thumbs, until it is connected to specific genes by the morphogen-caused folding,” Oro said. “Or sometimes the DNA folds weeks or months in advance, and this foreshadowing sets up a particular differentiation plan, poising the chromatin to assume a specific fate when the transcriptional regulator is added.”

Additionally, the researchers discovered that exposing the stem cells to retinoic acid and BMP together also triggered the expression of p63, indicating a complex and synergistic feedback loop that controls skin development.