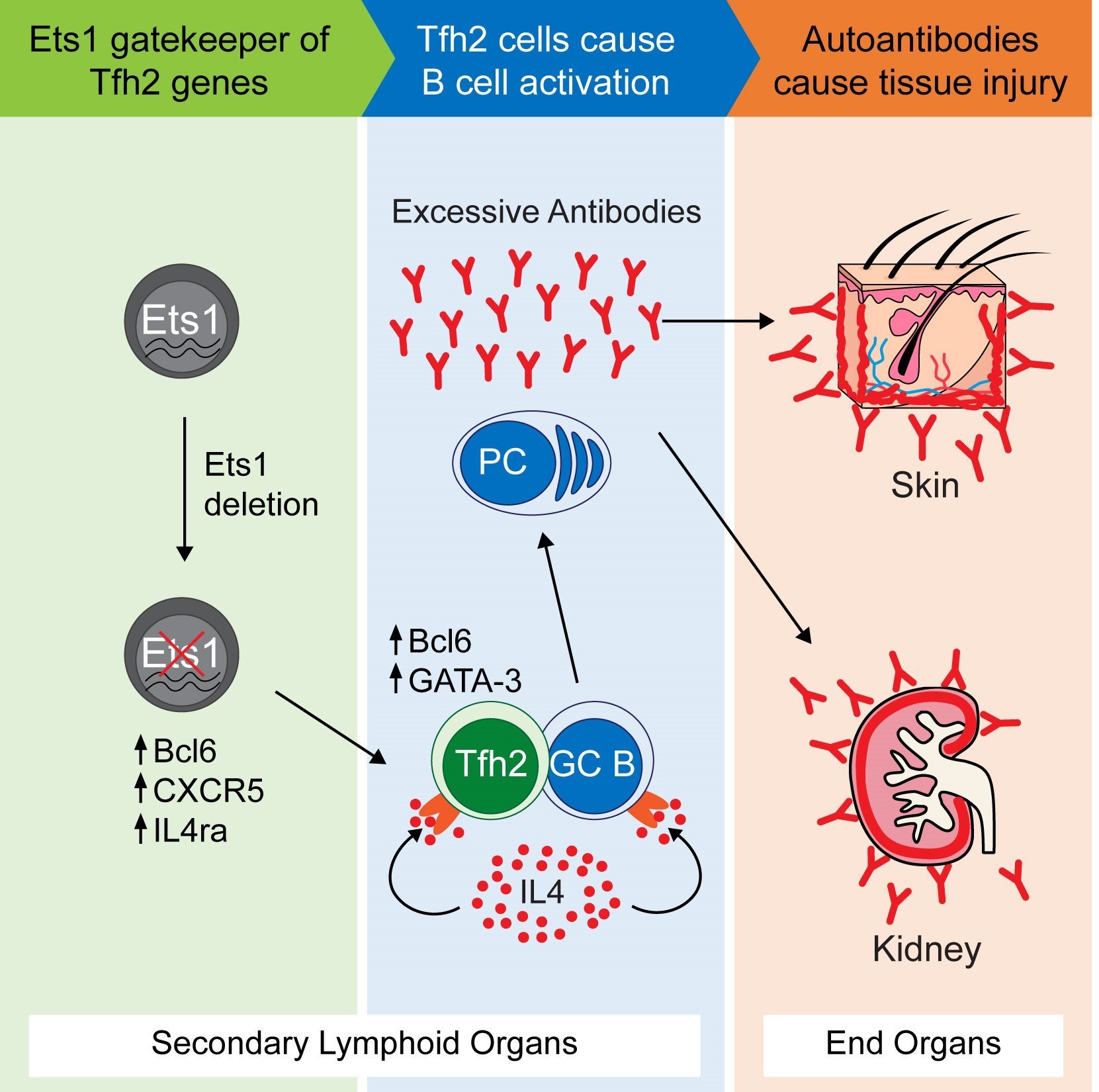 A research team at the Academy of Immunology and Microbiology, within the Institute for Basic Science (IBS) & Pohang University of Science and Technology (POSTECH) in South Korea has discovered the role of a key gene involved in the autoimmune disease systemic lupus erythematosus (SLE) or lupus for short. In the December issue of Immunity, the scientists reported that defects in Ets1 gene in both mice and humans are linked to some of the characteristic SLE immunity abnormalities, and found a potential therapeutic candidate.

SLE is a chronic disease in which the immune system uses autoantibodies to erroneously attack multiple healthy organs and tissues, such as skin, kidneys, joints and blood vessels. Genetic factors strongly influence SLE development: Over 60 genes have been linked to this disease so far, but have not been fully analyzed yet. In this study, IBS/POSTECH researchers concentrated on the Ets1 gene, one of the top four genes associated with SLE in Asian populations.

“A vast number of SLE patients have mutations in Ets1, but the reason why a faulty Ets1 is connected with autoimmunity was unknown. We wanted to solve this mystery,” explains Sin-Hyeog IM, the corresponding author of this study.

In an effort to understand how this gene is linked to SLE, the research team removed it from major types of immune cells in mice. They discovered that getting rid of Ets1 in CD4+ T cells specifically was sufficient for the development of SLE-like autoimmunity. Upon further evaluation, the team discovered that Ets1 is involved in controlling the expansion of a newly-described class of immune cells, known as T follicular helper type 2 (Tfh2) cells.

The increase in Tfh2 and the production of autoantibodies are related: Tfh2 cells interact with antibody-producing cells (B cells) in lymph nodes and the spleen, causing them to produce autoantibodies. Therefore, keeping these Tfh2 cells under tight control is critical to divert autoimmunity. The scientists found that Ets1 works as a restriction gate that halts the expression of key Tfh2 genes, thereby blocking Tfh2 expansion. Thus, when Ets1 is missing or mutated, like in SLE, Tfh2 cells are free to expand, leading to autoantibody production. The researchers observed this phenomenon in both mouse and human SLE cases.

Remarkably, the research team could also mitigate some SLE features by blocking a key component in the autoantibody production pathway known as IL4. After treating mice with anti-IL4, the scientists observed a reduction in spleen size and number of autoantibody-producing cells.

Currently, no cure is available for SLE. Steroid-based anti-inflammatory drugs are the main therapy choice, and although they alleviate acute symptoms, they are also accompanied by severe side effects. Other studied drugs focus on blocking B cells activation, but the clinical trials have rarely reached clinical significance, emphasizing the need for alternative strategies.