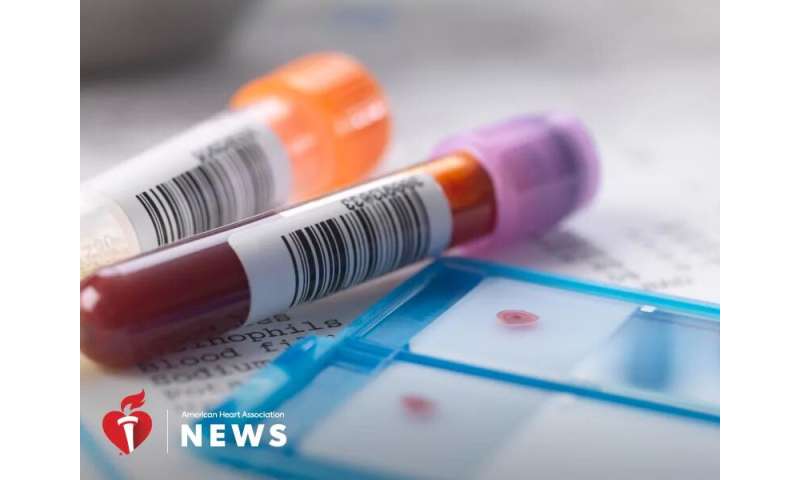 A hormone found in the blood that’s commonly linked to heart disease also might signal when someone is more likely to grow weaker or lose their ability to balance before they’re 70.

People in their early 60s with higher-than-normal levels of brain natriuretic peptide, or BNP, walked slower and were less able to raise themselves from a chair and balance on one leg up to nine years later, according to a study by British researchers published Tuesday in the American Heart Association’s journal Circulation.

While high levels of the peptide are associated with greater risk for heart attacks and other diseases, the new study indicates it could be more than just a warning sign of heart disease.

“We were surprised that BNP turned out to be the best predictor of our simple measures of aging,” said Yoav Ben-Shlomo, who helped author the study for the Medical Research Council Unit for Lifelong Health and Aging at University College London.

BNP is primarily produced in the heart’s left ventricle, the heart’s main pumping chamber. It’s produced when the heart is working too hard to pump blood. It is possible that if a blood test shows someone with higher-than-normal levels in their 30s or 40s, Ben-Shlomo said, they might be able to lessen their risk of aging more rapidly with more exercise and a healthy diet now.

The study evaluated 1,736 British men and women who have been tracked since their births in 1946 and who took physical performance tests at ages 60 to 65. Researchers in 2014 and 2015 updated those measurements, when the participants were in their late 60s.

“Our measures include how strong your grip is, how fast you walk a specific distance, how long it takes you to raise from a chair 10 times and how long you are able to stand on one leg, which is called the flamingo test,” Ben-Shlomo said.

If the results are confirmed in other independent studies, he said, it could mean future generations can better understand when they are younger how to lower their risk for a rapid loss of physical ability as they age. These blood markers also could be used in trials that are trying to slow down aging.

Increasing physical activity in mid-life might stave off a later physical decline for people with high BNP levels for similar reasons that people with more education are less likely to get dementia, Ben-Shlomo said.

“The theory is if you can reach a higher peak in young adulthood, you have more room to decline later in life—as we all do,” he said.

The new research reinforces earlier findings that exercise can help overcome a genetic history that makes someone more likely to suffer maladies like heart disease, said Dr. Erik Ingelsson, a professor of medicine at Stanford University who is not associated with the latest study.

“It’s a nice, well-performed study and a good opportunity to re-emphasize the benefits of physical activity,” Ingelsson said.

The new study accounted for common reasons people lose strength and balance late in life, including heart disease, kidney disease and diabetes. High levels of the peptides were more associated with lost balance and strength among study participants than health problems such as high blood pressure, high cholesterol and even smoking.

About 14 percent of U.S. adults smoked in 2017, down from more than 42 percent in 1965, the year after the U.S. surgeon general linked the habit to lung cancer and heart disease. Similarly, if blood markers could show a risk of faster-than-normal physical decline as people age, it might be the extra push some people need to change their behavior and reduce future health risks, Ben-Shlomo said.