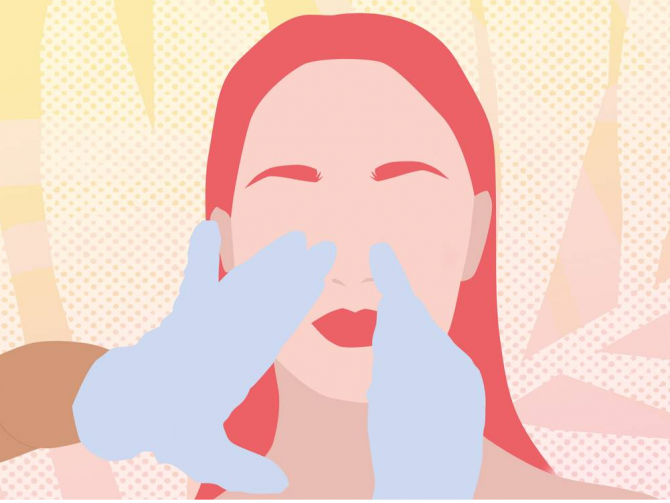 A deviated septum can long time not to give the person any trouble, but later can cause many troubles related to obstructed nasal breathing.

The nasal septum is a plate that separates the nasal cavity into two approximately equal halves. In the extreme part of it is formed by cartilage, and in the rear part of the small bone. Nasal septum covered with mucosa on both sides.

A deviated septum is a common pathology in otolaryngology. The reasons for the curvature can be injured (54%), abnormal development of cartilage and bone structures of the facial skeleton (32%), disturbance caused by the formation of polyps, hypertrophied turbinates, tumors (8%) and other reasons.

A deviated septum can be quite diverse in form, location, scale and extent of the violation of nasal breathing. Often it is a combination of curves, ridges, spikes, growths in the nasal septum, which are located mostly at the junction of the cartilage and bone of the nasal septum.

First, a deviated nasal septum may not cause any trouble. But every year, every disease is a viral infection kompensatornye power is lost. After some time, the motion of the air jet on the wrong path in the nasal cavity, promotes changes in the mucous membrane already other structures, – the mucous membrane of the same turbinate hypertrophy develops, and in this case, people can not do without vasoconstrictor drops.

The main symptoms of predeformation of the nasal septum

There are three basic types of deformation of the nasal septum:

The main complaint of the patient on the deformation of the nasal septum is difficulty in nasal breathing, nasal congestion, mucous discharge, sometimes the allocation of mucous-purulent character. Some people have noted periodic headaches, dry throat, congestion and noise in the ears, overall decreased sense of smell.

However, sometimes a deviated septum does not cause any noticeable sensations in the patient, nor the violation of nasal breathing, no other complaints. Thus, the indications for treatment of deviated nasal septum, as such, should be based on the patient’s complaints and clinical manifestations of the warp. The curvature of the nasal septum: how diagnosed

The consequences of a deviated nasal septum

The consequences of a deviated nasal septum can be varied. It is established that in case of violation of nasal breathing may develop changes in the vascular system, blood, reproductive organs, the body becomes more susceptible to adverse environmental factors and hypothermia because there is a relationship between immunity and indicators of nasal breathing. Therefore, it is important to seek consultation in a timely manner and not risk their health.

Ledenyaschie of the nasal septum

Reconstructive surgery on the nasal septum, is technically quite complex. Performed under local anaesthesia.

For infiltration anesthesia using 1% solution of novocaine (or 1% lidocaine) with the addition of adrenaline 1:1000 (one drop of adrenaline in 5 ml R-RA).