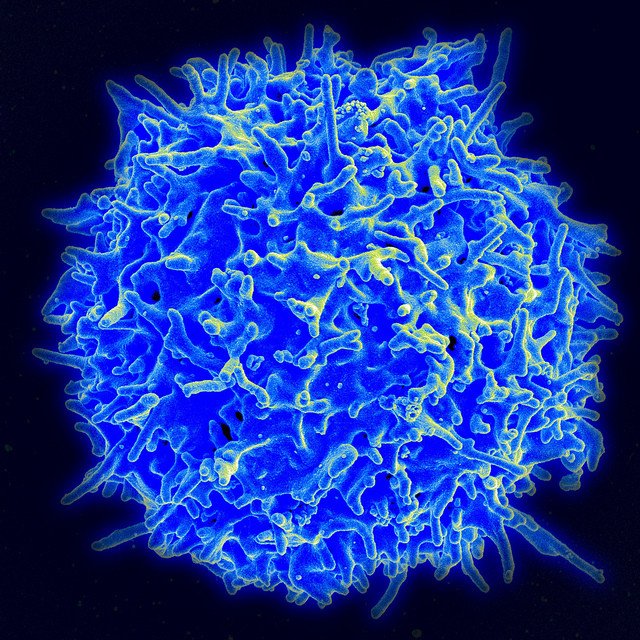 Spondyloarthritis is one of the most common types of chronic joint inflammation, affecting nearly 1 to 2 percent of the Western population. Cytokine blockade of tumor necrosis factor (TNF), and more recently, Interleukin-17 (IL-17), has revolutionized the outcomes for patients suffering from this disease by achieving high levels of therapeutic efficacy. The disease differs substantially from rheumatoid arthritis, another form of chronic arthritis, not only in clinical presentation, but also in the response to therapy—unlike the benefits of IL-17 inhibition in spondyloarthritis, this therapy failed in rheumatoid arthritis. The reason for this remained elusive. Koen Venken and Dirk Elewaut from the VIB-UGent Inflammation Research Center now report in Nature Communications that rare populations of unconventional T cells may account for this intriguing clinical observation.

Spondyloarthritides (SpA) refers to a cluster of inflammatory rheumatic diseases with a significant social-economic burden, affecting nearly 1 to 2 percent of the Western population. It is a complex disease with a diverse range of disease manifestations, including spinal and peripheral joint inflammation. Also, tissues outside the musculoskeletal system may be affected, including the skin, eye and gut. The development of the disease is mediated by dysregulated production of a number of proinflammatory mediators such as TNF and IL-17. Several cells within the immune system can produce IL-17, and the best described ones are T cells expressing the transcription factor RORγt (so called Th17 cells). Recently, it has become clear that other distinct cell types, called unconventional T cells, can also express RORγt and have the capacity to make IL-17.

Koen Venken (VIB-UGent) says, “When we started this project, most data on IL-17 production by unconventional T cells was derived from mouse models, and only limited information was available from humans. We could delineate rare subsets of RORγt+ unconventional T cells in the blood of healthy individuals showing a specific phenotype, enabling them to rapidly induce Th17-like immune responses. Interestingly, we observed a skewing towards RORγt+ cell subsets in blood samples taken from SpA patients, and remarkably, this trend was even more pronounced within inflamed joints from these patients.” When the researchers depleted these unconventional T cells from SpA joint samples, there was a drastic reduction in IL17 production, which indicates that they act as principal sources of pro-inflammatory cytokines in this disease.

Dirk Elewaut (VIB-UGent) says, “This is a fascinating result, as it indicates that rare cell types can play significant roles in inflammatory diseases; something which is often overlooked at in the research community.”

The new observations of unconventional T cells in SpA appear to be a discriminative feature compared to other common forms of chronic arthritis such as Rheumatoid Arthritis (RA). Dirk Elewaut says, “RA is a chronic autoimmune joint disease which has also been linked to IL-17 mediated pathology. Unexpectedly, treatment of these patients with anti-IL-17 failed to demonstrate major clinical benefits. By comparing gene expression profiles in unconventional T cells from SpA and RA patients—we discovered clear differences, showing an enrichment of IL-17 related genes in SpA as compared to RA derived cells.”

This skewed cytokine production could be reversed by pharmacologic modulation using an inhibitor of the transcription factor RORγt. Koen Venken says, “When we tested the RORγt inhibitor, we observed a striking difference between Th17 and unconventional T cells. While in Th17 cells both IL-17 and IL-22 were inhibited, only IL-17 was inhibited in unconventional T cells. This may have therapeutic implications since IL-22 plays a protective role at gut barrier surfaces.”