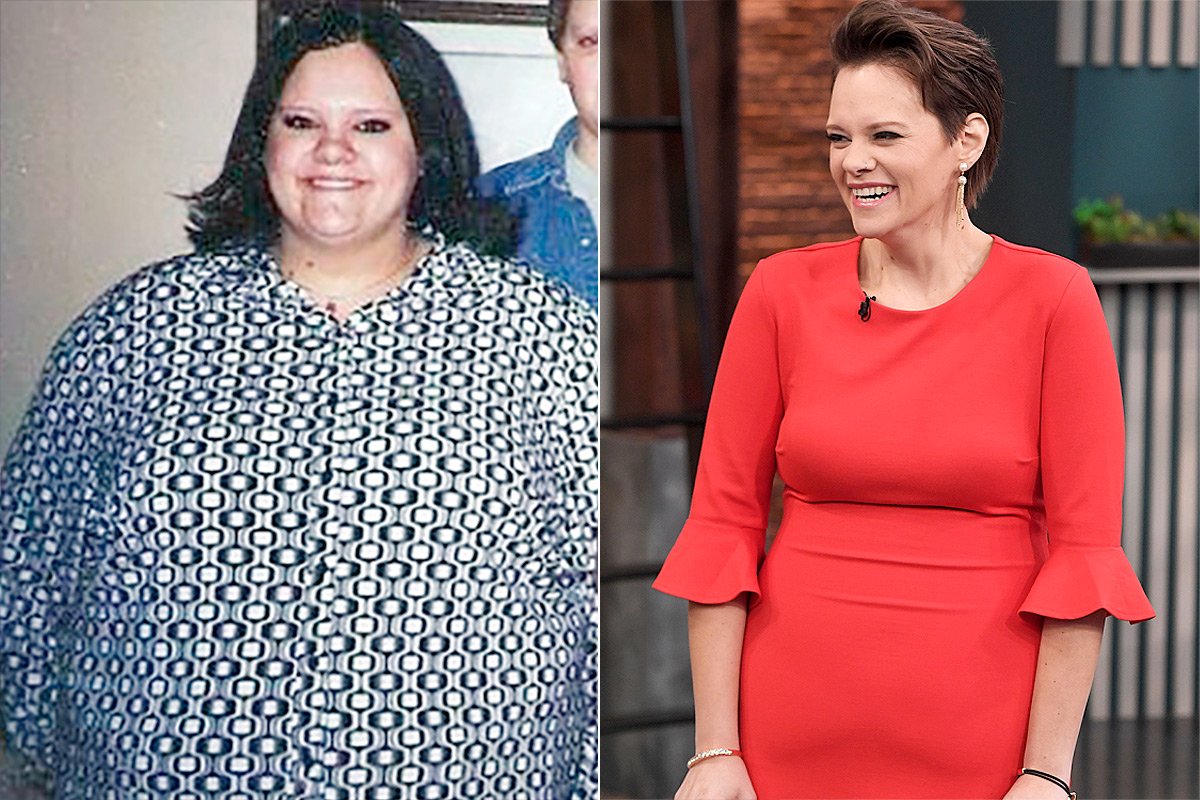 Ashleigh Kugler remembers being as young as 3 when she came up with a sneaky trick to get extra treats.

“I had two sets of grandparents that lived on the same farm and I would go to one house and eat snacks and cookies, and then come back to the other house and say that I never ate,” Kugler, 33, tells PEOPLE for the 2019 Half Their Size issue. “Looking back, that absolutely is not normal behavior for a 3-year-old.”

Her weight continued to climb, and by age 12 she was wearing men’s jeans with a 38-inch waist. In high school, Kugler couldn’t go for drives in a friend’s car because the seatbelt wouldn’t buckle over her waist. She couldn’t go on rides at the fair because the metal bars couldn’t safely close in place.

“I didn’t have any self-esteem. No self-confidence,” she says. “Back then, I just wanted to blend in. I didn’t want to be seen.”

Back at home, she was a binge eater, downing entire boxes of sugary cereal in one go and cases of snack cakes, then hiding the wrappers from her mom at the bottom of the trash can.

Then at age 19, weighing 288 lbs., Kugler saw pictures of herself that changed her life.

“I knew I was overweight,” she says. “But for some reason, in that moment, I just stepped outside my body and I realized: This is what you actually look like and you are probably not going to live to see 30 if you continue on this way. And it was just a big shock.”

Kugler learned that Weight Watchers, now WW, was coming to her small hometown of Garrison, North Dakota, and decided to join.

“I actually started promising myself: you’re going to give this one week. You’re going to actually follow the plan as you are supposed to, no cheating. And then when you go to weigh in next week and it doesn’t work, then you can quit,” she says. “Because that was such an outside my comfort zone thing. So I was already telling myself I could quit before I even tried it.”

But after that first week of counting points and eating healthier foods, she went to the WW meeting to weigh-in, and Kugler (and the WW leader) were shocked to see that she had lost nearly 12 lbs.

RELATED VIDEO: How a Mom of Two Lost Half Her Size — And Is Keeping it Off Through Another Pregnancy

“In that moment I knew if I could lose 12 pounds in one week, I could keep going,” she says. “I could lose one or two pounds and keep going until I hit the end. It might take me five years to get there, and I knew it’s not going to be this every week. But I knew that if I just kept going, some day I was going to get to the end. I was hellbent and bound and determined after that week.”

From there she lost around 100 lbs. from ditching processed foods entirely, making healthier versions of the meals she craved, like hamburgers, and keeping track of everything she eats in a journal. And after giving birth to her first child, son Ethan, in 2009, she lost more weight, for a total of 143 lbs., which she maintained through a second pregnancy.

Kugler now uses social media as a support system to maintain her weight loss, and was in disbelief when she got an Instagram message from a producer on the Rachael Ray Show, who wanted to fly her out to New York for an appearance on the Jan. 2 episode, in collaboration with PEOPLE.

Getting to be in the magazine holds a special meaning for Kugler, who remembers reading the Half Their Size issue in high school.

“I was in such awe over these real people living real lives and achieving something like that, and I would always feel this little fire inside me like, ‘maybe one day,’ “ she recalls. “And then in the years when I was on my weight loss journey, I would always have friends and family look at the issues and say ‘THIS COULD BE YOU!’ and I always just kind of laughed it off, because while I was absolutely proud of what I had accomplished; never in my wildest dreams did I think a small-town girl like me from rural North Dakota could ever end up in People magazine.”